Xiaomi has everything set to launch its new device Redmi Y2 in India on June 7. We all are familiar with its rumored specifications. It looks like the rumor mill is so much active nowadays and providing actual information. Now, the device spotted on the well-known benchmarking website, Geekbench which reveals its performance and key-specs. It is worth to keep in mind that Redmi Y2 is the exact same device which has been already made a debut in China recently with the tag of Redmi S2. 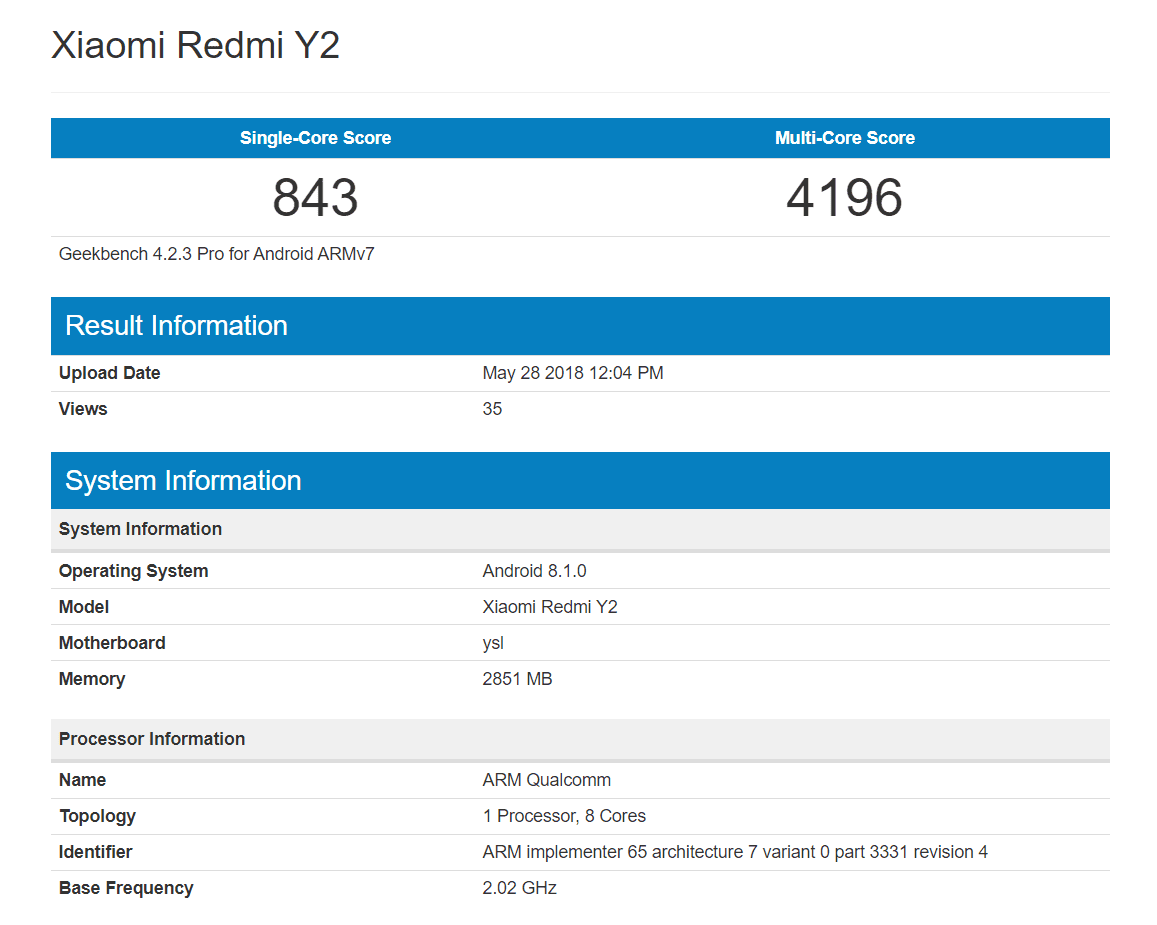 The device has managed to get the good numbers. However, it is clear the device will fit in the category of mid-range smartphones. As per mentioned in the Geekbench results, upcoming Xiaomi Redmi Y2 will be powered by the 2GHz Octa-core processor. But, there is no included information regarding the SoC which is said to be Snapdragon 625 coupled with the 3GB of RAM. The prototype spotted on the Geekbench running on the Android 8.1 Oreo made an 843 score for the Single-core and 4196 scores for Multi-core.

Xiaomi Redmi S2 is renamed as Redmi Y2 to launch in the Indian mobile phone market. It is worth to consider Redmi S2 specifications here. Redmi S2 sports on a 5.99-inch HD+ display having 18:9 aspect ratio. The device is powered by the Snapdragon 625 processor paired with the 3GB/4GB RAM and 32GB/64GB internal storage. But, there will be an external slot to expand the storage using microSD card. Xiaomi has installed 3,080 mAh battery to fuel the chipset.

In the camera department, Redmi S2 comes with the dual camera of 12MP and 5MP vertically positioned on the rear side. Interestingly, the company has decided to provide the AI features in the camera. So, the user will be able to access all of that AI featured applications on their device. It is not anything yet confirmed regarding the price. But, the device should get the price tag in between Rs. 10,000 to Rs. 12,000. Let me know what do you think about this device in the comment box.