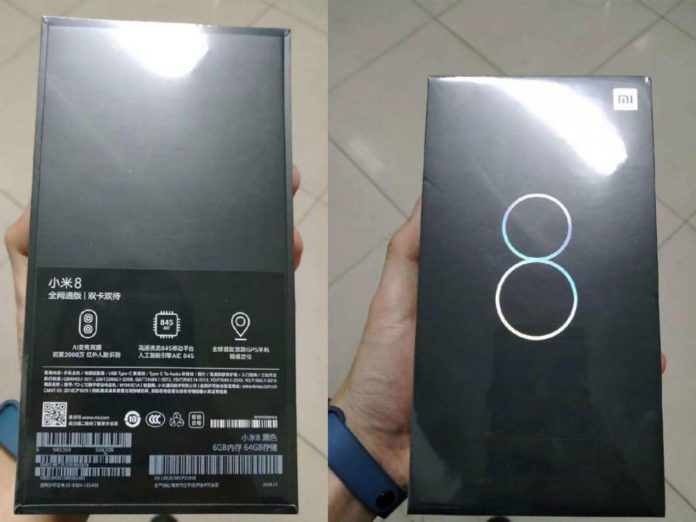 After several leaks have been surfaced online, we know how the design will look alike and what will be inside the Xiaomi MI8. Yet another leak came out and this time retailer box with specs has leaked out.

Previous rumors suggest that this device will launch in two different variants and the leaked version is 64GB coupled with 6GB of RAM. It’s powered by the latest and greatest Qualcomm has to offer, Snapdragon 845.

The main feature of this device is 3D facial recognition which will be the first on any Android smartphone. It will have a big notch just like the iPhone X. Front camera will be 20MP which supports face recognition.  Dual GPS is also a key feature of this device, yet we don’t have any information about how it will work and what it will be used for.

Adding to this is a latest leaked image as spotted on Weibo, that reveals the upcoming Mi 8 will come in two storage variants – 6GB RAM and 64 GB storage for CNY2,799 (approximately Rs 29,918) and a high-end variant featuring 8GB RAM with 128GB internal storage that will be priced at CNY 3,199 (approximately Rs 34,193). This device will be a good competitor of the OnePlus 6.
- Advertisement -