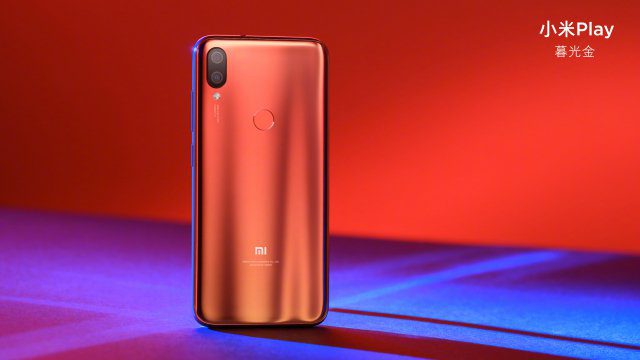 Xiaomi Mi Play is going to launch in China tomorrow and a day before the launch company shared some of the pictures of the device on their weibo account. The key specifications of a smartphone have been already revealed by TENAA listing. Just a day ahead of its launch, Xiaomi President Lin Bin has shared official images of the smartphone to reveal its gradient color appeal.

A recent leak revealed that the device will come in three colors – Black, Dream Blue, and Dawn Gold and Xiaomi president Lin Bin confirmed that by posting pictures. The device comes in gradient colors.

The back design has a gradient feel when lighting reflects on it. The device sports verticle dual rear camera with flash and has a fingerprint sensor at the back. One of the pictures also confirms the presence of headphone jack. At the front, there is a dewdrop notch which houses the selfie camera.

Xiaomi Mi Play expected to come with a 5.84-inch FHD+ display with the dewdrop notch at the top. The device is powered by unknown octa-core processor clocked at 2.3GHZ. The device is packed with a 2900mAh battery.

Talking of optics, It features a 12MP rear primary sensor coupled with a depth sensor. At the front, it sports 8MP selfie shooter.

There is no word on pricing yet so stay tuned with us for further updates from tomorrow launch.