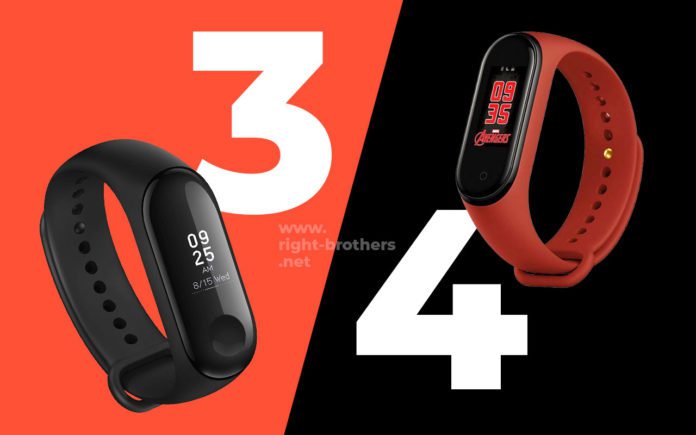 Xiaomi’s next-generation fitness band is now official. So, called Mi Band 4 could be previous year’s Mi Band 3 successor. Because it comes with a bit of customized hardware. Just like me, many of you are in the market to find out is it really worth to upgrade over Mi Band 3 or to know changes that Xiaomi made in Mi Band 4 over Mi Band 3. So, in this post, we will see Xiaomi Mi Band 3 vs Mi Band 4: Detailed comparison.

It would be really simple to give the right answer to my question. And it would be ‘Yes’. Of course, you should go for upgradation if you have Mi Band 3 and planning to buy Mi Band 4. For people who are the first time, there is a clear way. Now, there are lots of other fitness bands available you can purchase. Especially want to mention popular one – Honor Band 4.

Well, in comparison of Mi Band 3 and Mi Band 4 we will go through some detailed information including, first of all, what new you are getting in Mi Band 4 and then detailed side by side comparison.

With the new Mi Band 4, Xiaomi also has announced new integrated payment mode. Now that the band has color AMOLED display which can display further text on the screen, the user can now use a QR code to make payments on-the-go.

Mi Band 4 also comes with the microphone that enabled the voice command feature. However, during the presentation Xiaomi said, the user will be able to control a compatible connected device via voice commands. Now, it remains mystery will it work with other commands in the future or not.

So, these are new changes you will find on Mi Band 4 over Mi Band 3. Now, it’s time to do detailed specifications comparison of Mi Band 4 and Mi Band 3 side by side so that you can have a better idea.

Mi Band 3 vs Mi Band 4: Side by Side Comparison

So that wraps up the battle of Xiaomi Mi Band 3 vs Mi Band 4. Now, I guess I have solved all your doubts. Please do let me know in the comment section what you are thinking about our comparison. Did it help to solve your problem and made a clear choice?