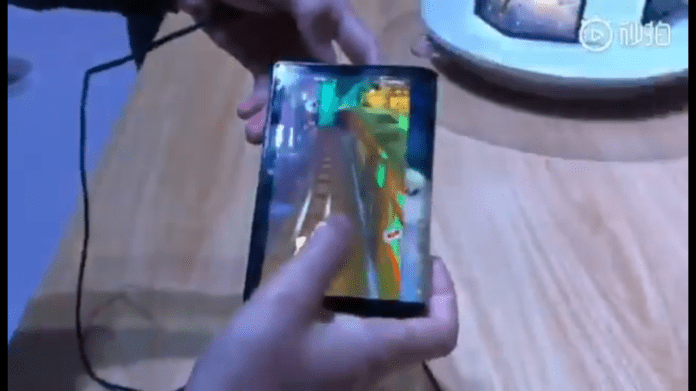 Smartphone manufacturers are turning towards to achieve higher screen-to-body ratio and probably in the next few months, the foldable smartphones will arrive. People will get used to it and it is obvious but it will take some time. As per the recent information shared by the Ice Universe on his official Twitter handle, the world’s first ‘foldable screen’ smartphone released by Rouyu Technology.

Back on June 6, 2018, Rouyu Technology has announced the large-scale mass production line with the total investment of 11 billion yuan. The plant was successfully turned on and put into the production of the 6th generation flexible displays. The production capacity of the plant exceed the 50 million flexible displays screens per year which can support the larger number of consumer electronics, transportation, smart home, education office, robotics, etc.

The newly released Flexible Screen smartphone will be powered by the Snapdragon 8150 processor. Well, in the video it can be clearly seen that the design is very rough. And it looks like the device with a foldable screen has been released to achieve a tag of ‘First’ in flexible screen smartphone industry.

This is the “world’s first foldable screen phone” released by Rouyu Technology, which will use the Snapdragon 8150 processor, but its design is very rough, just to seize the “first”, this is a futures product. pic.twitter.com/M0v9o2z0Bw

In the video, the company’s employee shows us a demo. First, he starts the Subway Surfers game on the unfolded screen. He plays a game little bit which is running perfectly. And then the guy folds the screen and the game screen takes place on one half. So, you can use the phone as a normally you use using your one hand.

The concept is pretty much the same as we have seen in different patents and some fan-made designs of Samsung Galaxy X which is probably coming next year.