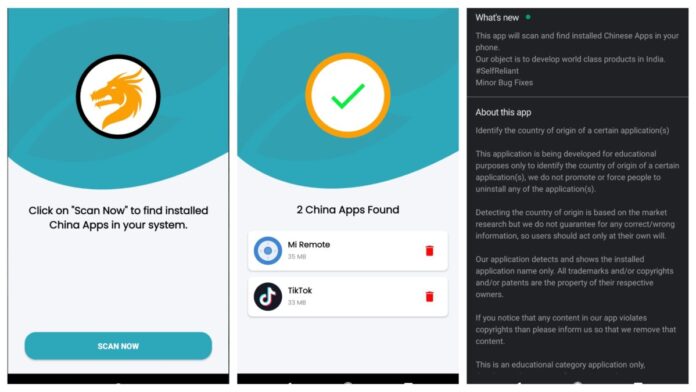 Why Google Removed Mitro and Remove China App from Play Store – If you’re not leaving under the rock then you may know that India is currently going through the Corona pandemic and after Prime Minister’s focus words “Vocal for Local” Many people trying to avoid using Chinese applications and accessories from their life. In this time, two apps were launched on Play Store from the Indian developer which have been removed in the meantime.

Google has removed two Indian based apps which got immensely popular in no time. One of the application Mitron which was purchased by Indian developer from a Pakistani firm got 5 million installs before it was taken down. Google removed Mitron from the Play Store for violating its ‘spam and minimum functionality’ policy.

That means the Mitro application doesn’t provide anything new or better than other alternative applications. Google clearly mentioned in their privacy policy that it doesn’t allow apps that provide the same experience as that of other apps that are already listed on the Play Store and don’t add enough value on their own.

Well, If you’re not aware Mitro application was basically a clone of the TikTok application which is quite popular among most countries.

On the other hand, the “Remove China App” was brought by Indian developers and got 5 million downloads from Android users. The application was designed and published by the Jaipur based company – OneTouch App Labs.

The application had only one purpose – It shows the application which is owned by the Chinese company and encourages people to uninstall it to support India following the tension at the India- China border.

Although there is no strong reason to kick this app out from the play store but as Google mentioned the application was violating ‘Deceptive Behavior Policy.’ As we go deep, the policy further claims that an app is not allowed to make the changes in settings and outside applications. So that is why Google removed Mitro and Remove China apps from play store.