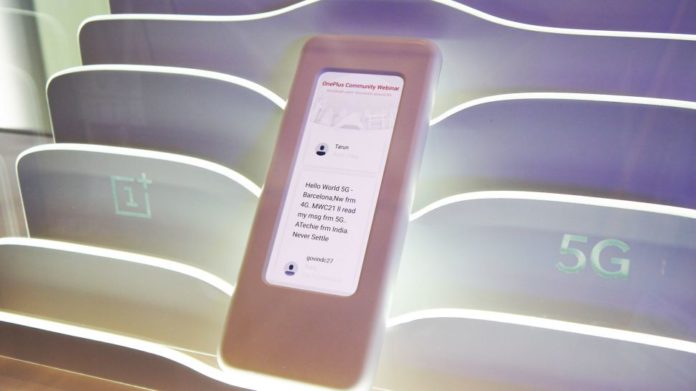 You might not have heard any kind of big reveal news from OnePlus at MWC 2019. That’s because the company has not yet anything ready to showcase. But, a few days back we went through news of OnePlus’ 5G prototype showcase at MWC. And that’s it, the company showcased a ‘probably’ a new device at their booth which is powered by the brand new Snapdragon 855 chipset.

Although, the prototype also gives us an idea about the upcoming OnePlus 7 device. OnePlus has passed the tough examination against Samsung and Apple for delivering better internals for a cheaper price. And again the company is in a new race of 5G device.

OnePlus 7 Could Have Screen ‘Without’ Notch

OnePlus 6 with the rectangular notch and the OnePlus 6T with the waterdrop notch – you don’t think the company could vanish the ‘notch’ trend through their upcoming OnePlus 7 smartphone to come with the new pop-up or sliding camera technology?

Also, there is no notch appeared on the prototype. So, it seems the Chinese smartphone maker, OnePlus might be preparing to become a member of ‘no notch’ bandwagon. Because of the prototype prepared such way it only shows us the display, there is hard to tell anything if there is bezel on the top or on the bottom.

Also, OnePlus 6T has very thin bezels, and the OnePlus 7 could get the thin bezels without no notch. So, there may be a sliding mechanism I would say or a pop-up technology for camera placement.

The prototype showcased at Mobile World Congress, it is powered by the Snapdragon 855 chipset and equipped with the 5G network. Thanks to X50 modem which adds 5G support can reach up to 4.2 Gbps of download speed. But, all of these we have seen just a prototype, obviously there will be changes in OnePlus 7 design. But it is juicy to go through an idea of what we have.