Vivo Nex was the first of its kind of phone to launch with bezel-less display and without notch. There was a pop-up camera technology which was kind of cool. The device was great but it wasn’t perfect for various reasons. And So Vivo made a second generation of the device which might be named as Nex 2S.

Vivo Nex 2s is again bezel-less device without notch but this time, instead of sliding camera technology company decided to ditch the front camera and put the secondary display at the back so one can use rear cameras for a selfie. The idea isn’t new, Nubia already launched a dual-screen smartphone in the market with a high-end specification.

Apart from the dual screen, The device will support the In-Display fingerprint sensor which will be faster than the one in Vivo Nex. The device will have a triple rear camera to take better photos with telephoto and wide-angle lens.

Recently, Company confirmed on Chinese website weibo that – The successor of Vivo Nex – Vivo Nex S2 will be announced on December 11. 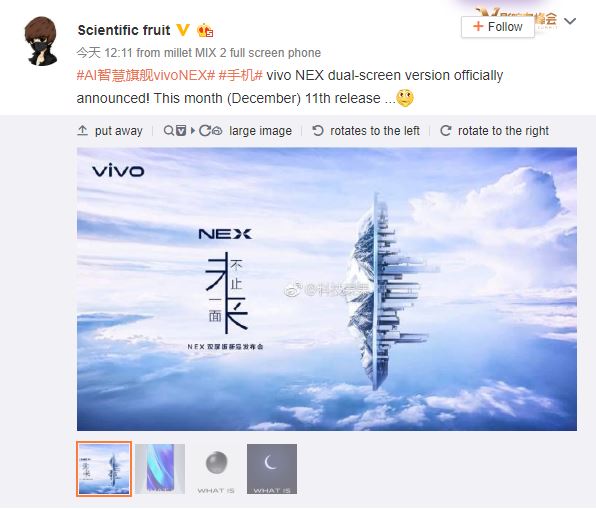 Talking about the Specifications, Vivo Nex S2 will have a bigger primary display with a 19:9 aspect ratio and at the back, there will be a slightly smaller display with 16:9 aspect ratio. Furthermore, The device is likely to come with a triple rear camera at the back in circular shape. One of the sensors will be ToF (3D Time-of-Field) sensor for better depth of field and portrait shots.

Apart from that all the specifications are unknown so stay tuned with to get an update whenever the new leaks available.