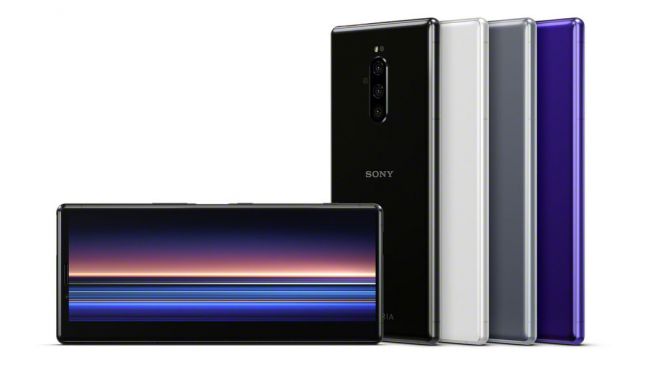 Sony Launches World’s First 4k display with 21:9 aspect ration smartphone dubbed as Xperia 1 at MWC 2019. Sony Xperia 1 is the upgrade over the premium series XZ. The device packs some interesting specifications which might help Sony to get back their lost market.

Sony Xperia 1 has a 6.5-inch CinemaWide display with 21:9 aspect ratio without any notch. Also, The display is well calibrated with the color calibration of Sony’s professional master monitors. The display has 3,840 x 1,644 (4k) resolution with HDR support and it even can stream all the Netflix or Amazon Prime content in HDR. Furthermore, The Dual stereo speaks with Dolby sound support even improves the streaming on this Xperia device.

Talking of Optics, At the rear, it has 12MP primary camera of 1/2.6” sensor and f/1.6 aperture which supports both EIS and OIS coupled with another 12MP sensor Telephoto lens and 12MP wide angle lens. For the selfies and video calling it features a single 8MP camera.

Sony Xperia 1 is powered by Snapdragon 855 chipset and comes in 6GB RAM coupled with 64GB or 128GB of internal storage. Furthermore, Storage can be expanded up to 512GB via MicroSD card.

There is a new feature called Game Enhances which balances the performance and battery life of the phone. It can also record your gameplay video and your commentary at the same time using 8MP selfie camera and if you’re enabled to complete the mission then it can also search on youtube simultaneously.

The phone packs 3300 mAH battery which supports multiple modes to make it last longer. Sony Xperia 1 supports IP68 water resistance and it even has Gorilla Glass 6 protection at the front and back sides. The Sony Xperia 1 will be available to purchase later in late spring so make sure to stay tuned with us. The pricing is yet unknown to us.