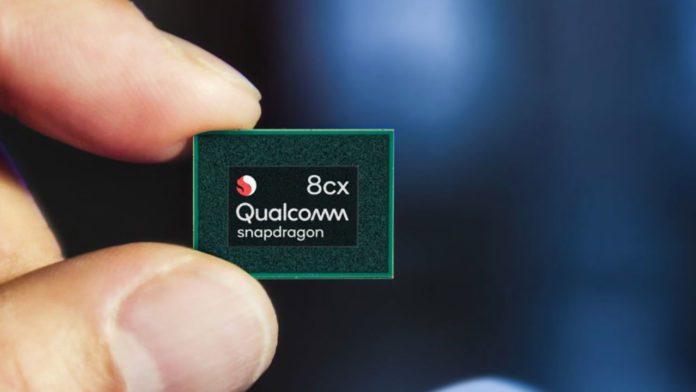 Qualcomm an American semiconductor and telecommunications equipment company which is known for its Snapdragon chips in the market. Well, the company is highly associated with the chips currently manufactured for mobile phones. But, it appears Qualcomm now release their new generation of chips which will be designed for laptops.

Qualcomm’s Snapdragon chips which are used for a smartphone nowadays are designed to deliver higher performance along with the less power consumption at the same time. This semiconductor giant had previously put the Mobile Platform’s Snapdragon processors into the HP Envy x2 and Asus NovaGo laptops. However, turns out they failed to gain user’s attention. Because the processors designed for platform contains different design than Intel chips which are made for computers.

This year, Qualcomm unveiled its mighty Snapdragon 855 processor which aims to bring higher performance than any other Qualcomm chip along with the lower power consumption. So, Qualcomm now knows that there would be a lot of excitement for battery focussed processors. When it comes to the Intel, the chips are generally designed for the desktop PCs. That means, there is constant power supply attached. But, in laptops, they found to be the much hungry within a short period of time.

Snapdragon 8cx will be able to deliver the promised performance. Qualcomm has simply doubled up the number of transistors and memory bandwidth for more faster and complex data transfer which also adds support for 4K HDR-enabled display. Furthermore, the chipset also packs the X55 modem. That means it is 5G ready.

Now, let us take a look at the benchmark score compared with the Intel i5-8250U. However, it remains a mystery on which computer Qualcomm did carry out these benchmarks. 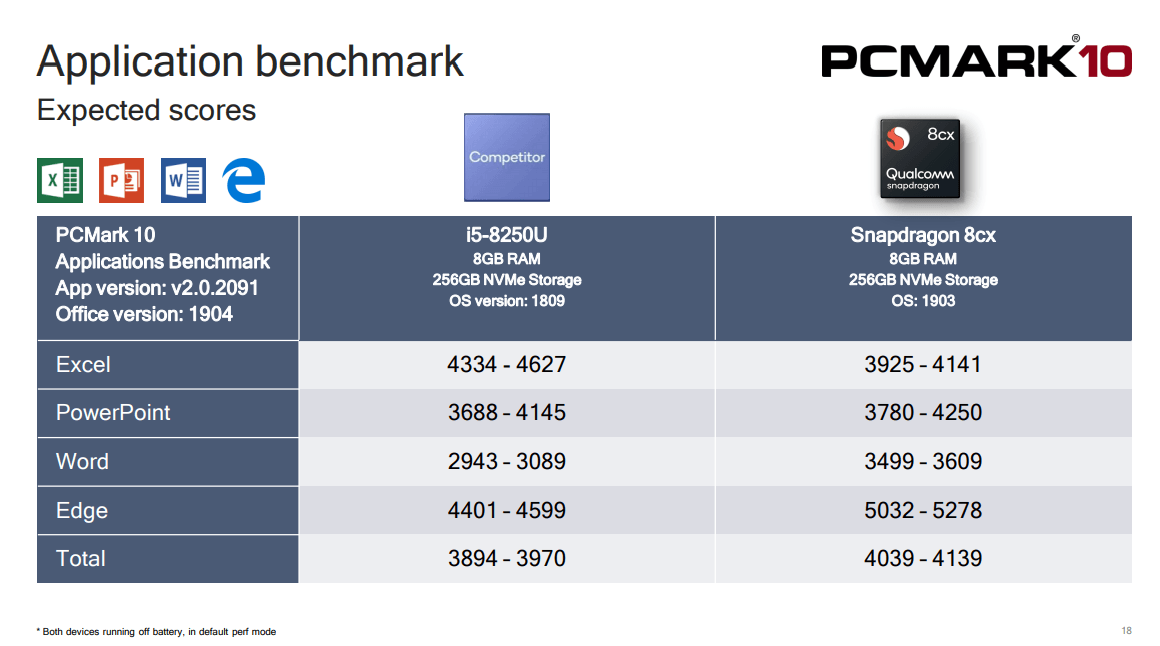 The benchmark scores are carried out using the PCMark10. As we can see the Snapdragon 8cx is running on the neck to neck performance compared to the Intel i5. Both the computers are having the same 8GB of RAM and 256GB of NVMe storage. While the Windows versions are different, though. But, that doesn’t matter a lot. Because the benchmark test carried out for Microsoft Office and it’s on the same version.

Snapdragon 8cx is on the edges. However, don’t get too excited. The office applications are optimized to run smoothly on Qualcomm’s Snapdragon 8cs processor. Qualcomm is in talks with other app developers to optimize such as Spotify, Skype, Slack, etc. 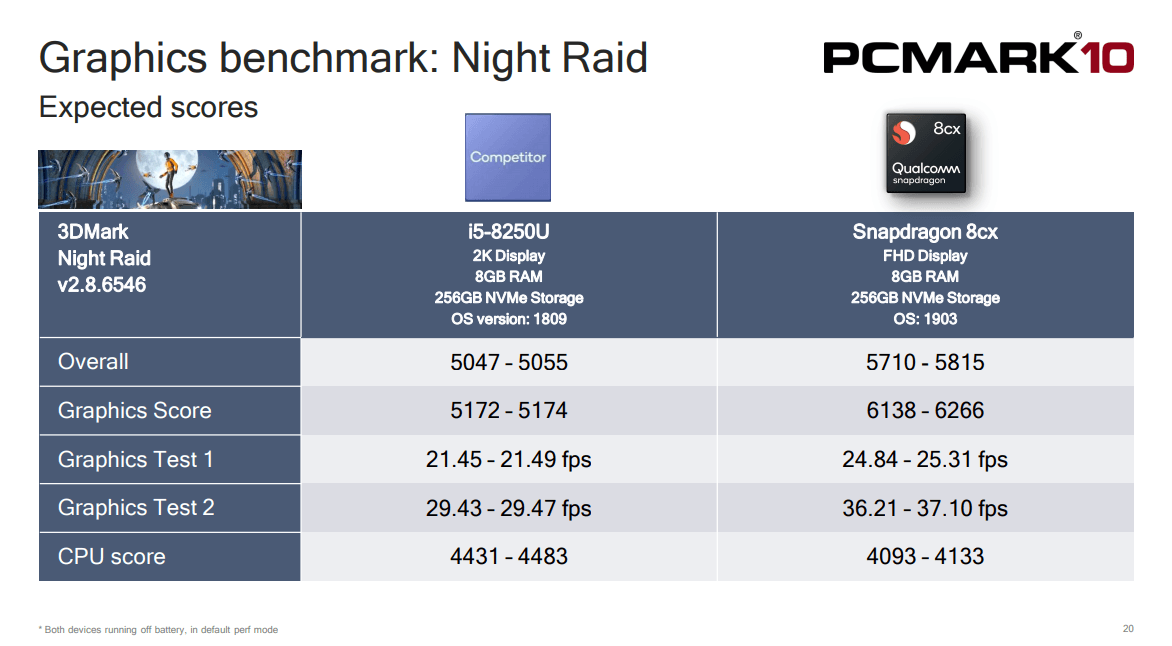 Night Raid GPU benchmark is also carried out. As mentioned earlier, Qualcomm’s Snapdragon 8cx comes with the doubled up the transistors of Snapdragon 855. That means twice performance over the GPU and CPU. The Intel i5 processor is clearly winning here. But, looking upon the Snapdragon 8cx, thanks to more advanced GPU, it seems ready for GPU workloads. 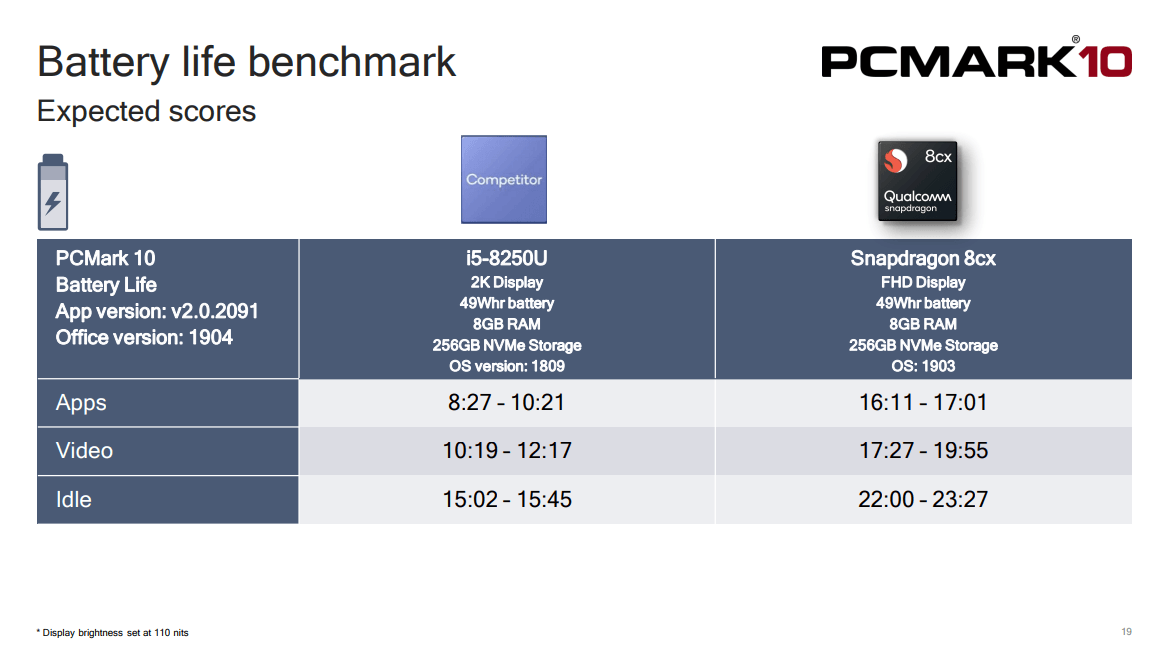 There is no offense. Obviously, the Snapdragon 8cx completely destroyed the Intel i5 processor in terms of the battery efficiency. It could change the way the user uses his/her laptop. With the Snapdragon 8cx powered laptops, the user doesn’t need to shut them down while going to office from home. They can just put them onto the sleep mode. For apps usage, the chipset easily delivers the 16 to 17 hours of screen-on-time.

It Would Become Game Changer for Light Weight Users

Different communities require different specifications. As far as gamers go, Snapdragon 8cx powered laptop could be bummer. But, for lightweight users like content creators, writers, this upcoming product can change things drastically. Now, all we can do is wait for the laptop to come in the market and practically see.