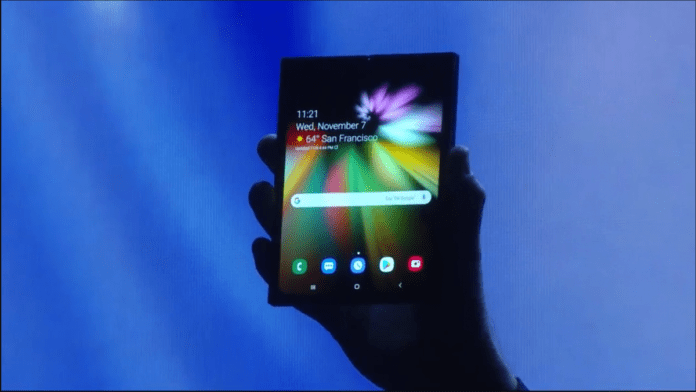 Today, Samsung Mobile officially announced that the company will launch a foldable smartphone on February 20 along with three other S10 series device. The 27-second promo video was uploaded on every social media account of Samsung.

Of course, the Foldable smartphone won’t be that cheap. As the company has invested a lot of amount in R&D and it costs more to fold the display like that, It will definitely cost more than your normal smartphone. As per the early leaks, the Samsung Galaxy Foldable smartphone will cost around $1770 (more than Rs. 1,30,000). The device will pack some high-end specifications and Google’s customized Android operating system.

Talking of Display, The device will likely sport 4.58-inch AMOLED display and when it opens, it converts to the 7.3-inch Tablet.

Along with Samsung’s Foldable smartphone, there are three other smartphones dubbed Samsung Galaxy S10e, Galaxy S10, and Galaxy S10 Plus likely to launch on February 20. All of the devices will pack Snapdragon 855 chipset (U.S. variant) and/or Exynos 9820 chipset (other regions). Samsung will introduce Infinity O display with this smartphone and also some exclusive feature like In-Display fingerprint sensor based on Ultrasonic technology. Samsung is also working on a 5G device which is rumored to be launch on the same day.