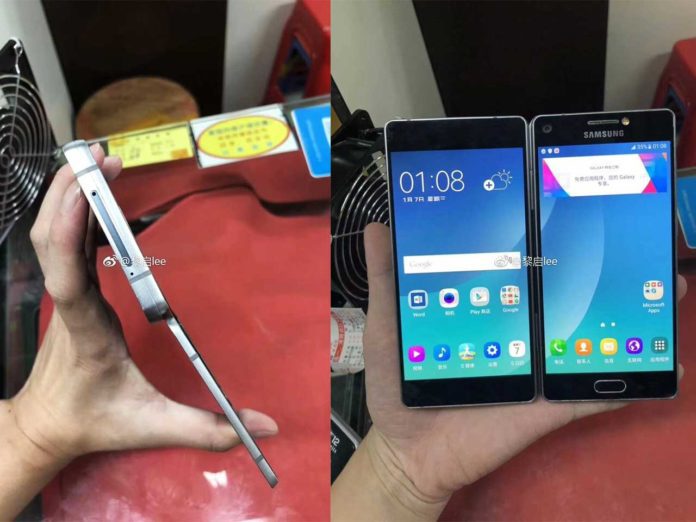 We have seen ‘foldable smartphone‘ but not ‘foldable screen smartphone‘. The words say everything for what we are waiting. The leaked which claims to have Samsung’s prototype are below. The device design is completely matched with the patent that we have seen earlier in the previous year. The company has not launched this foldable smartphone on the market. Later on, the launch was canceled.

The design looks similar to the previously launched Axon M which was the foldable smartphone from ZTE. You can fold device and use it with the single screen and unfold it to use it with the dual screen. Just like that, the images show Samsung device looks very thick.

Now, it is clear that company has already developed a foldable smartphone which leads us to think about the upcoming Samsung Galaxy X device. Samsung was working on its foldable smartphone project which was named Project V. The prototype shown in the image has a model number SM-G929F. If we take a look at Samsung Galaxy S6 and S7 model number they are SM-G925X and SM-G930X, respectively. So, we can come to the conclusion that device was likely manufactured around 2015-2016. Further, the button placement and antenna lines also point out towards the same design as S6 and S7. You can see the date on the home screen which shows when the device was tested. It shows the date January 7th.

You are free to share your thoughts in the comment section. Let me know what do you think!

Please Subscribe to our Newsletter and join our Telegram channel for instant updates!