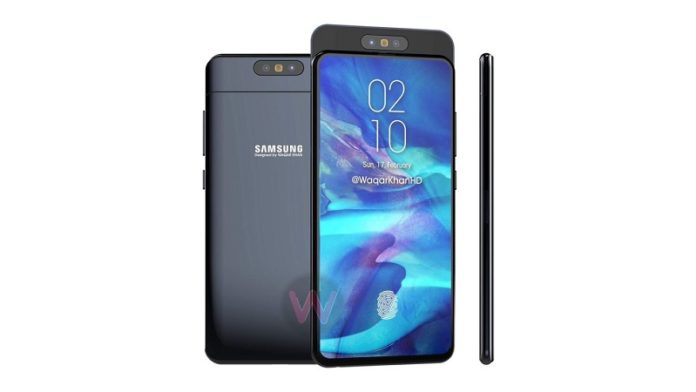 Samsung Galaxy A80 just launched in at an event in Thailand. The device packs some interesting specifications and features rotating camera which lets you take the selfies with the same high-resolution rear cameras. So that makes the device notch-less and you get the full bezel-less display.

The Samsung Galaxy A80 features 6.7-inch FullHD+ Super AMOLED New Infinity Display. It has a 20:9 aspect ratio without having a notch. The AMOLED panel also supports the In-Display fingerprint sensor.

The device is powered by Qualcomm’s latest chipset Snapdragon 730G (G stands for better gaming performance). Snapdragon 730G is an octa-core chipset in which two high-performance cores are clocked at 2.2GHz and 6 power cores are clocked at 1.8GHz. The device comes with 8GB RAM and 128GB internal storage which can be expanded up to 512GB via MicroSD card.

Talking of Optics, It has a rotating triple camera setup. The camera stays at the rear by default but when you open the front camera the slider opens up and the camera module rotates to the front. It features 48MP (f/2.0) primary camera sensor which is paired with 8MP (f/2.2) Ultra Wide Angle sensor with 123 Degree FoV and 3D depth camera sensor. The Samsung Galaxy A80 Camera has features like Super Steady video mode, Scene Optimizer with detection for 30 scenes, and Flaw Detection.

Samsung Galaxy A80 packs 3700mAh battery with 25W Fast charging support. It runs on Android Pie based on OneUI out of the box. The other features like Bixby and Intelligent Performance Enhancer are present which is used to optimize the performance of your android device. It also supports Dolby Atom Sounds to improve the audio quality of the device.

Samsung Galaxy A80 will be available in Angel Gold, Ghost White, and Phantom Black color variants. Unfortunately, The company didn’t reveal the pricing information at the event but Samsung did say that this device will be available for consumer starting from May 29.