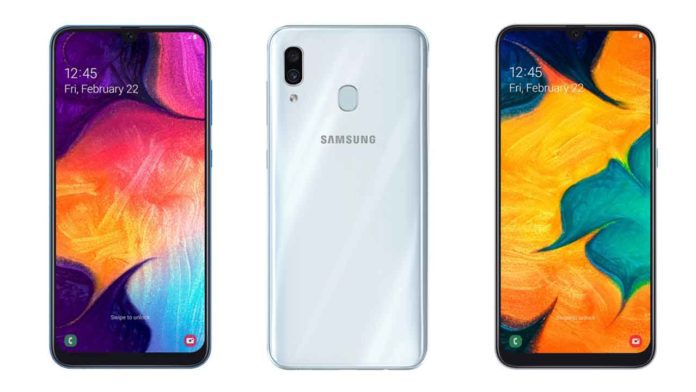 Samsung announced two new smartphones at MWC 2019. Samsung Galaxy A30 and Galaxy A50 are Samsung’s first phone to feature Infinity U Display. Both the smartphone has a Super AMOLED display with Full HD+ resolution.

Samsung Galaxy A50 is a higher end variant and Galaxy A30 is midrange variant. Samsung Galaxy A50 will have In-Display fingerprint sensor. Another common thing is both the phones have a wide-angle camera sensor.

Samsung Galaxy A50 is high-end variant in A series. It has 6.4-inch Super AMOLED display with Infinity U display. Talking of the Optics, It will have a 25MP primary camera sensor coupled with 5MP depth sensor and 8MP wide-angle camera sensor. For the selfies and video calling it has a 25MP sensor.

While the Samsung Galaxy A30 gets the dual rear camera – The primary camera is 16MP coupled with a 5MP secondary sensor. For the selfies and video calling it has a 16MP sensor.

Samsung Galaxy A30 and Galaxy A50 is launched and will be available to buy after official launch in India. Samsung only launched A30 and A50 at MWC but we will see addition A10 at India launch.

We will get to know more about the devices on February 28. BTW Redmi Note 7 is launching same day so make sure to follow us on Telegram and Facebook for future updates.