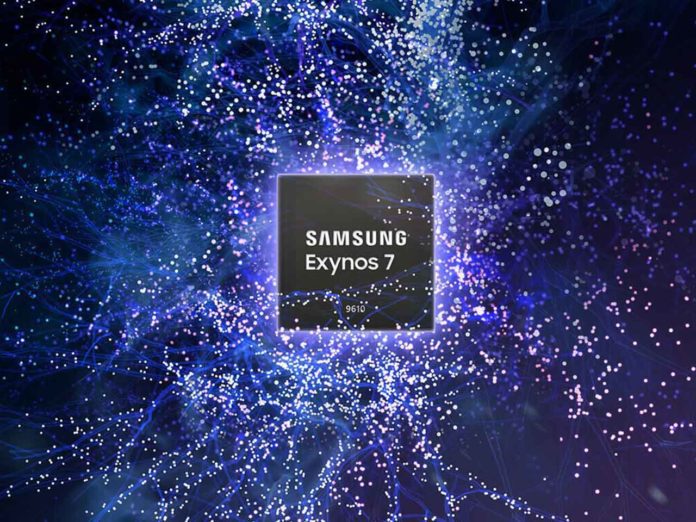 The Samsung Exynos 7 Series (9610) mobile processor features a vision and image processing unit based on neural network engine. With the advanced ISP and MFC, the vision image processing unit paves the way for DSLR-like picture quality and functions on the mobile devices. The Exynos 9610, an octa-core mobile processor built on a 10nm FinFET process, features an LTE modem and diverse wireless connectivity for, faster and seamless mobile experiences.

The Exynos 9610 processor with the advanced vision image processing unit enables DSLR-like photography experience in a slim mobile device. The advanced face detection enables the camera to detect faces that are not facing forward and even the ones that are partially covered with objects like hair or a hat. Via smart depth sensing capability, bokeh or out-focused portraits can be taken with a single camera. Through cleverly merging multiple frames, the unit enhances the signal-to-noise ratio (SNR) and brightness for an amazing picture even in low-light environments. The Exynos 9610 processor also supports diverse dual-camera solutions including bokeh or out-focused portraits, a fusion of a color image with a black-and-white image for more vivid colors, and smooth transition between wide and telephoto lens.

Through special hardware design, the Exynos 9610, even when coupled with a conventional two-stack image sensor, is able to quickly process image frames for a time-stretching mind-boggling 480fps slow-motion in full HD. To achieve this, the image signal processor (ISP)’s performance is improved by 1.6 times and MIPI interface speed by little over two-fold. In addition, the processor adopted a premium multi-format codec (MFC) that encodes and decodes up to 4K 120fps with HEVC(H.265) codec.

The Exynos 9610 features an octa-core CPU that consists of four Cortex-A73 cores with a clock speed of up to 2.3GHz for performance-intensive tasks and four Cortex-A53 cores running at up to 1.6GHz for light and always-on tasks. In addition, the Exynos 9610 processor is the first in the Exynos 7 Series to adopt the advanced 10nm FinFET process technology for enhanced performance with better power efficiency.

The Exynos 9610 features ARM Mali-G72 MP3 GPU based on a second-generation Bifrost architecture that enables a realistic 3D graphics on mobile devices. The GPU supports the latest graphics APIs and diverse processing techniques such as MSAA(Multi-Sample Anti-Aliasing) for greater realism when playing high fidelity mobile games, and ASTC (Adaptive Scalable Texture Compression) and AFPC (Arm Frame Buffer Compression) that reduces memory bandwidth for more efficient image and graphics rendering.
So, these all are Specifications are features that Exynos supports as of now. Samsung might use this processor in Note 9. Let me know in comments below what do you think about this processor.
- Advertisement -