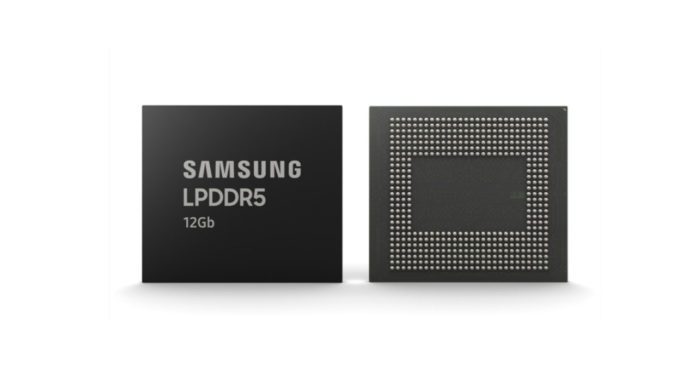 The Korean electronics giant Samsung announced that it has begun the mass production of the 12Gb (Gigabit) LPDDR5 DRAM for future smartphones. The new DRAM will follow the current industry standard and it will be the industry’s first 12Gb LPDDR5 DRAM. According to Samsung, their new LPDDR5 DRAM is optimized for enabling the 5G and Artificial Intelligence features for the mobile phones.

An executive vice president of DRAM Product and Technology of Samsung Electronics, Jung-bae Lee said, “With mass production of the 12Gb LPDDR5 built on Samsung’s latest second-generation 10-nanometer (nm) class process, we are thrilled to be supporting the timely launch of 5G flagship smartphones for our customers worldwide,” Further he adds, “Samsung remains committed to rapidly introducing next-generation mobile memory technologies that deliver greater performance and higher capacity, as we continue to aggressively drive growth of the premium memory market.”

Currently, Samsung is producing 16Gb LPDDR4X DRAM for smartphones which offers the data transfer rate 4,266 megabits per second (Mb/s). While the new 12Gb LPDDR5 DRAM will offer the data transfer rate of 5,500 megabits per second (Mb/s) which is 1.3 times faster then LPDDR4X DRAM. So, when it is made into a 12GB package, it will be able to transfer 44GB of data or 12 Full HD movies (around 3.7GB) in only a second.

While transferring such a higher amount of data within a second, this new mobile phone RAM will eat 30% less power. Thanks to its new circuit design that allows the RAM to clock efficiently by consuming less power.

Well, Samsung also said that it will also start manufacturing the 16Gb LPDDR5 next year to solidify its position in this competitive market. Samsung has not revealed the date when this new 12Gb LPDDR5 DRAM will become available in the market. But, I think, it will not hit anytime soon by the end of this year.