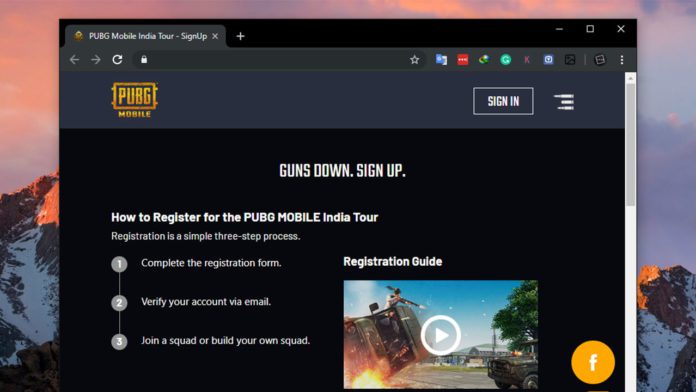 PlayerUnknown’s BattleGround aka PUBG has 200 million total users while around 30 million user goes online daily. The game has taken over the mobile gaming market by storm all over the world. And so we come across so many ‘headlines’ in India. This time PUBG is back with another new big tournament for the PUBG lovers in India. In this post, I will show you how to register for PUBG Mobile India Tour 2019 tournament.

In partnership with Tencent games, PlayerUnknown’s BattleGround Mobile India Tour 2019 is the largest scale tournament arriving again after the PUBG Mobile India Series 2018. The tournament is big in its own because the winning team will get 1.5 crores pool prize in this tournament which is the highest prize ever until now in PUBG tournament.

Any PUBG players can participate in this tournament. So, here we got you covered with all the details and how to register for PUBG Mobile India tour tournament.

How to Register for PUBG Mobile Tour 2019

Users Must Select One Region to Play

Well, the new PUBG Mobile Tour India 2019 is open for all users across India. Although, contestants must select one of the 4 regional options provided to them to register in. These are the following regions;

4 Phases of the Tournament

In Phase 1, squads will have to play 15 classic mode matches on Erangel map. Among them, 10 best-scored games will be considered. The score will be given based upon kills and finishing position. If there will be a tie, other factors such as survival time and accuracy will be considered.

In round 1, 500 squads will be divided into the 25 groups with 20 squads each. After the game, only the top 3 squads by the score from each group will be advanced for round 2. The parameters to choose winning teams will be the same as mentioned earlier.

In round 2, the 100 squads will be divided into five groups with 20 squads each. They will play three matches. And only the top four squads, by score, from each group, will move on the group finals.

These two rounds will be played in different maps includes, Erangel, Vikendi, Miramar and Sanhok.

The top 20 winner squad now will move for the group finals. These 20 squads will play five matches. Four squads with the highest scores move to the Grand finals. This will also include all the maps. For this Phase, squads will have to travel to the pre-determined venues.

Furthermore, all other teams who make it to the finales will receive cash price.