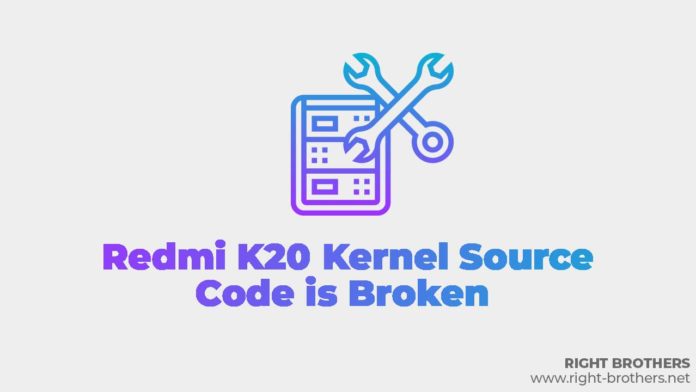 Xiaomi — the name is better known for the mid-range handsets with the better internals. However, people would change their mindsets for recently launched Redmi K20 lineup. Because they might are most controversial phones because of their price tags. But, every coin has two sides. On another side, it offers flagship-level internals at the crazy low price.

Xiaomi devices are better known for there development support. The company supports developers to build custom ROMs, custom kernels, etc. While the Redmi K20 launched in China, the company has made global kernel source available on GitHub which is eventually can be used for Indian variant of Redmi K20 and Xiaomi Mi 9T. However, the kernel source turned out damaged as per reported by one developer on XDA-Developers forum.

Recently, we have shared a post regarding “How you can overclock Redmi K20 Pro display to 75Hz using a mod“. Redmi K20 comes with the same display hardware. So, this handset would also support the same mod. Although, it must be developed using Redmi K20/Mi 9T kernel source which is obvious.

A developer named Zenkrey was reportedly trying to develop this custom mod for Redmi K20 device which helps to overclock display on 75Hz. Eventually, the process ends up with an error after trying continuously and he came up with the conclusion that Xiaomi Redmi K20/Mi 9T kernel source is fundamentally broken. After applying the mod, the device doesn’t boot up. So, he targeted that an important component which is used to control the peripherals on boot is missing within kernel source. This results in the black screen.

The kernel source is the base column to develop mods, ROMs, kernels and other things that can add tweak in the smartphone. This needs to be solved for the custom development of Redmi K20/Mi 9T device. And therefore, he asked to raise the matter to Xiaomi itself publicly on XDA-Developers forum.