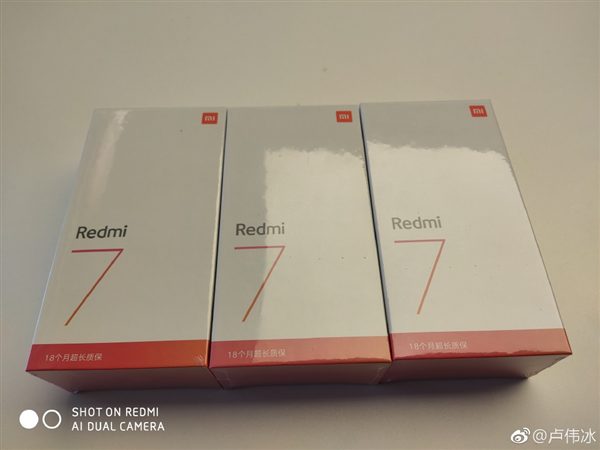 It is not secret anymore that Redmi Note 7 Pro to launch on March 18 in China. The phone has already made its debut in India which comes with the Snapdragon 675 under the hood with Sony IMX 586 – a true 48MP camera sensor. But, Xiaomi has some other products to launch during the event. And one of them could be the Redmi 7. Many speculations are already made. And just before its official launch, Redmi 7 retail box image has been leaked by someone on Weibo.

A Chinese manufacturer Xiaomi is known in the market for its value for money product. And it seems for their China-specific customers, the company shipping their products with six months of extra warranty. Just like the Redmi Note 7, new Redmi 7 will also come with the 18 months of warranty. We already went through specifications. Rumor mill always stays ready to leak new devices. So, thanks to them. The device leaked through TENNA page and hands-on video.

The listing reveals the model number M1810F6LE and reveals its specifications. Redmi 7 will have 6.26-inch HD+ display with 1520×720 resolution. The Redmi 7 has a bigger display compared to Redmi 6’s 5.45-inch LCD panel. So the display size is similar to Redmi Note 7 series but the resolution is not the same. Further, the device will be powered by the Snapdragon 632 chipset which will be coupled with the 2GB / 3GB / 4GB RAM.

The TENAA listing mentions the 3900mAh battery which shows the lower parameter so we can expect 4000mAh battery from Redmi 7 device. Redmi 7 will be powered by octa-core processor which will be clocked at 1.8Ghz. The previous leaks suggested that Redmi 7 will launch in three variant