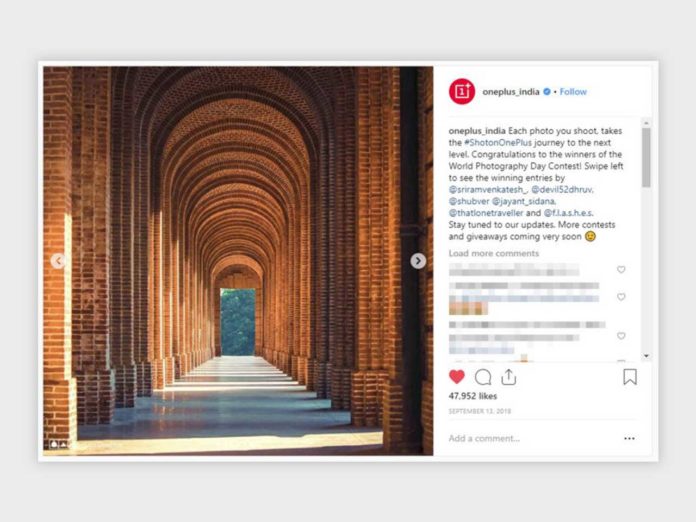 Chinese manufacturer OnePlus announced winners of #ShotonOnePlus contest back in September 2018. The contest was for Indian users to celebrate photos captured by the OnePlus device cameras. But it seems, the results are not satisfying. OnePlus given shoutouts to all winners by uploading winning pictures on their official Instagram page and promoting them. Somehow, one winning shot made photographer Aman Bhargava shocked. Because the same image was captured by him two years ago with DSLR.

Aman decided to take a dig into the situation and he found that the image was the same image he captured, but Pratyesh Yadav (who submitted image) cropped it a little bit to make it look slightly different from original ones. Although, main properties such as shadows, leaves, toning, remains the same as original one has.

Bharagava captured this image in 2016 and it was uploaded on Instagram on May 22, 2017. And later on, Bhargava contacted and said that winning photo is definitely his photo which is stolen by Pratyesh Yadav and submitted with nifty changes. Further, he also mailed Yadav and said that this apparent theft image. In reply, Yadav denied and delivered original image file and EXIF data. You can see the image attached below which shows a screenshot of mail.

On his reply, Bhargava has shown some valid points in his mail. In reply, he writes, “You’ve just sent me a copy of my own image. You’ve done a terrible job at faking the EXIF details too, by the way. The EXIF says that this image was clicked at 2:00 PM, which is in the middle of the afternoon. This image was clicked in the evening.”

Although, we Right Brothers have also done some work. The EXIF data shows the device name ‘OnePlus A6000’. Now it makes no sense here. Because OnePlus A6000 is a known as OnePlus 6 which launched in 2018. While the date when the image was captured shows 15/04/2017. So, everything is now clear here.

Later on, Bhargava contacted to OnePlus to discuss on this stolen image. He got the following response in his email from OnePlus,

“We are of the honest opinion that the contest winner (@thatlonetraveller) of the World Photography Day Contest may have indulged in malpractice that may have potentially involved a violation of Mr. Aman Bhargava’s intellectual property and such acts once proven are a punishable offense under the law of the land.

We are appalled that such an incident has happened and understand the ordeal you as an artist had to go through. We would like to state that we did all possible measures to ensure all terms and conditions for the contest were followed. Particularly for this case, it was mandatory for the photo to be shot on a OnePlus device. When we received all the photos and examined their EXIF details, we found no discrepancies. Hence, all photos met the criteria and we assure you that we have not been negligent in assessing the same.”

Later on, OnePlus contacted Yadav and asked to give $600 smartphone prize back and informed him to that they will be conducting the further investigation and finding solutions to overcome.