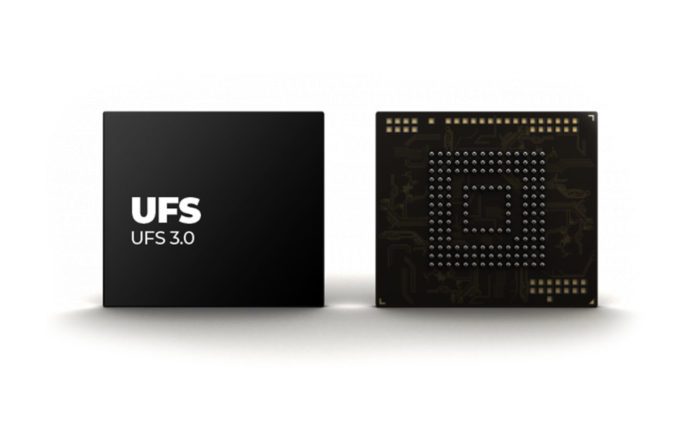 As we all know, OnePlus’ new flagship killer is now live in the market. Arguably, the phone offers decent internals at a decent price. Well, just for this article, we are considering OnePlus 7 Pro rather than OnePlus 7. OnePlus often does branding of the new storage type under the hood of OnePlus 7 Pro. And we all know it is UFS 3.0 which is the fastest storage type on paper. Although, in the real world, there are few interesting results.

A most common type of storage used in recent smartphones is UFS 2.1. However, earlier in the previous year, Samsung announced that the company will be launching its first foldable device with the UFS 3.0. But, we know its not everyone’s cup of tea. The phone passing through bad consequences.

Right now, in the real world, the highest generation of UFS storage used which we have seen is UFS 2.1 which is used by Samsung Galaxy S10+, Huawei P30 Pro, etc. devices. These devices are latest and recently launched devices.

The above image has been shared by Samsung in 2018. You can see the difference between reading and writing speed of UFS 2.1 and UFS 3.0. There is way more difference in numbers. However, the results are on paper. And technically, the OnePlus 7 Pro would be much faster in every way like while opening apps, data copy, data reading, etc. So, the question is how much of bandwidth does a smartphone use? If it uses then how much?

How test has been carried out?

Gary from Android Authority tested Disk Test application on OnePlus 7 Pro with several other devices which has UFS 2.1 storage type. The application is available on Google Play Store for free which shows the sequential reading/writing as well as random reading/writing speed of the disk on the smartphone.

Folks, who don’t know what Sequential and Random reading/writing speed;

With Sequential speed, one can understand how much time does a smartphone storage system takes to write/read larger files which user don’t use on a day to day basis. Hence, a sequential writing/reading form factor is not that much important.

With Random speed, one can understand how much time does a smartphone storage system takes to write/read smaller files.

It is arguably much more important to any smartphone user than sequential writing/reading performance. Because it is not often that user writing large files sequentially to the storage system. To complete day to day task, the user encounters tons of small files as they use a smartphone.

What are the final results?

A Disk Test application has been run on several smartphones. Some of them are latest, recently launched devices while some of them are older as well. Although, except, OnePlus 7 Pro, here remaining other devices has UFS 2.1 type of storage system. The test has been run on the following devices: Galaxy Note 8, Galaxy Note 9, Galaxy S10+, Huawei P30 Pro, OnePlus 6T and OnePlus 7 Pro. 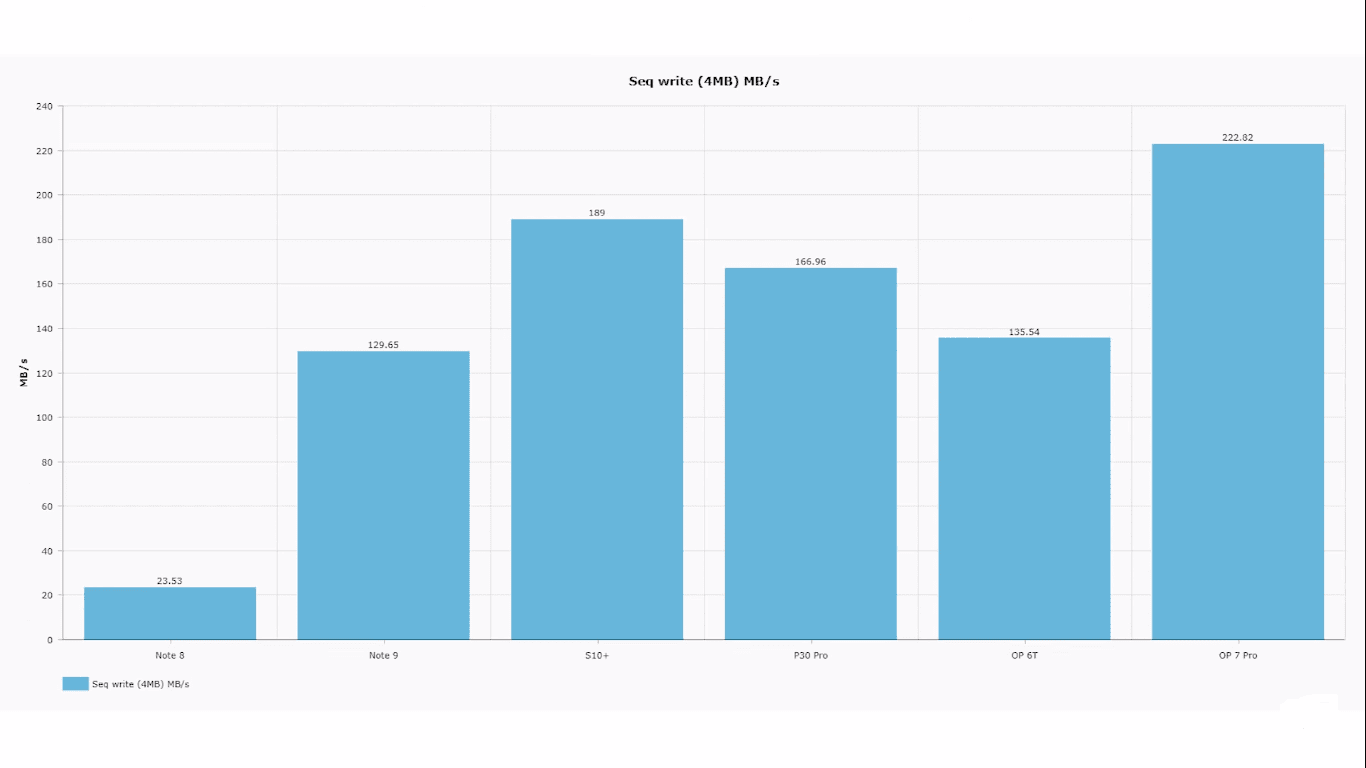 Alright, so, the first results are here for shows the sequential write speed of devices. OnePlus 7 Pro takes the initial lead of course to write the larger file on disk. So, it’s a clear winner. The overall speed obtained for OP7 Pro is 222.82 MB/s. That means the smartphone is not using the complete bandwidth to write the file on the storage disk. 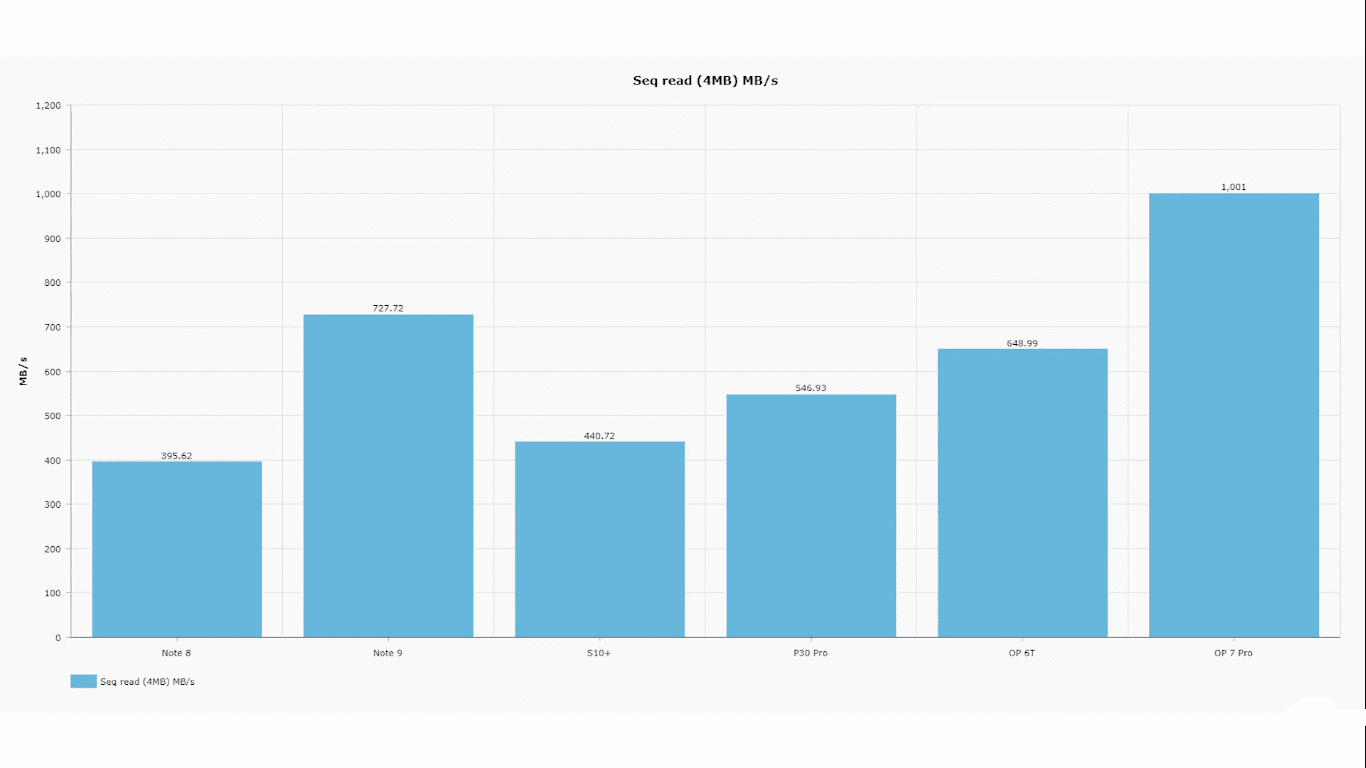 Well, as I said earlier, people would not have to read or write larger files continuously in a day. To complete several tasks a random read and write speed matters a much more for any smartphone. 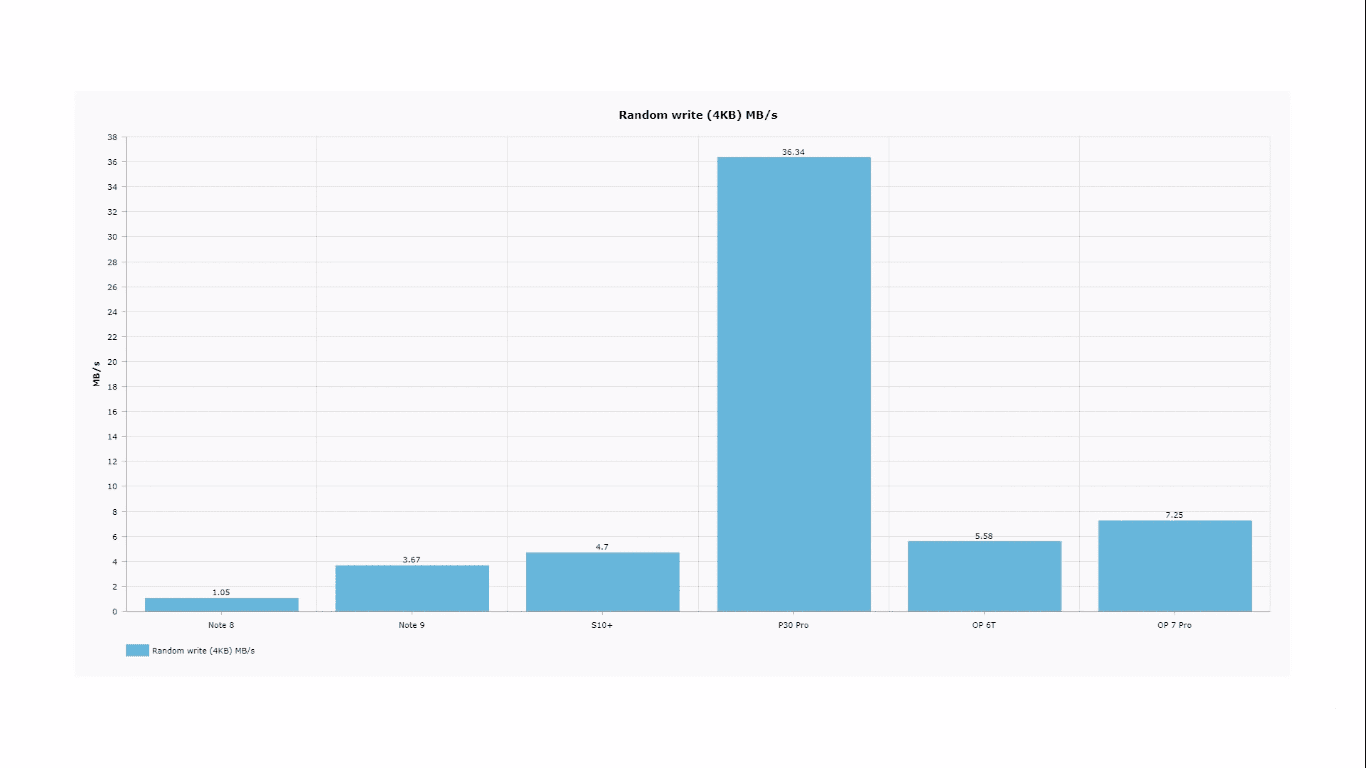 I am definitely sure, you might be wondering about this result because Huawei P30 goes high in the sky while others are still on the floor. Let’s ignore P30 Pro for a while. Comparing to the remaining devices, OnePlus 7 Pro is quite a winner here in terms of the random writing speed which is quite a good thing.

Although, the device is not using the complete bandwidth to write the files. Because there are much smaller files need to be written, the software analysis the file and takes speed whatever it requires to do the work.

The reason here for the high random writing speed on Huawei P30 Pro is Huawei’s own EROFS file system which is highly optimized for their smartphones. As a result, it is much faster in writing files on the disk. 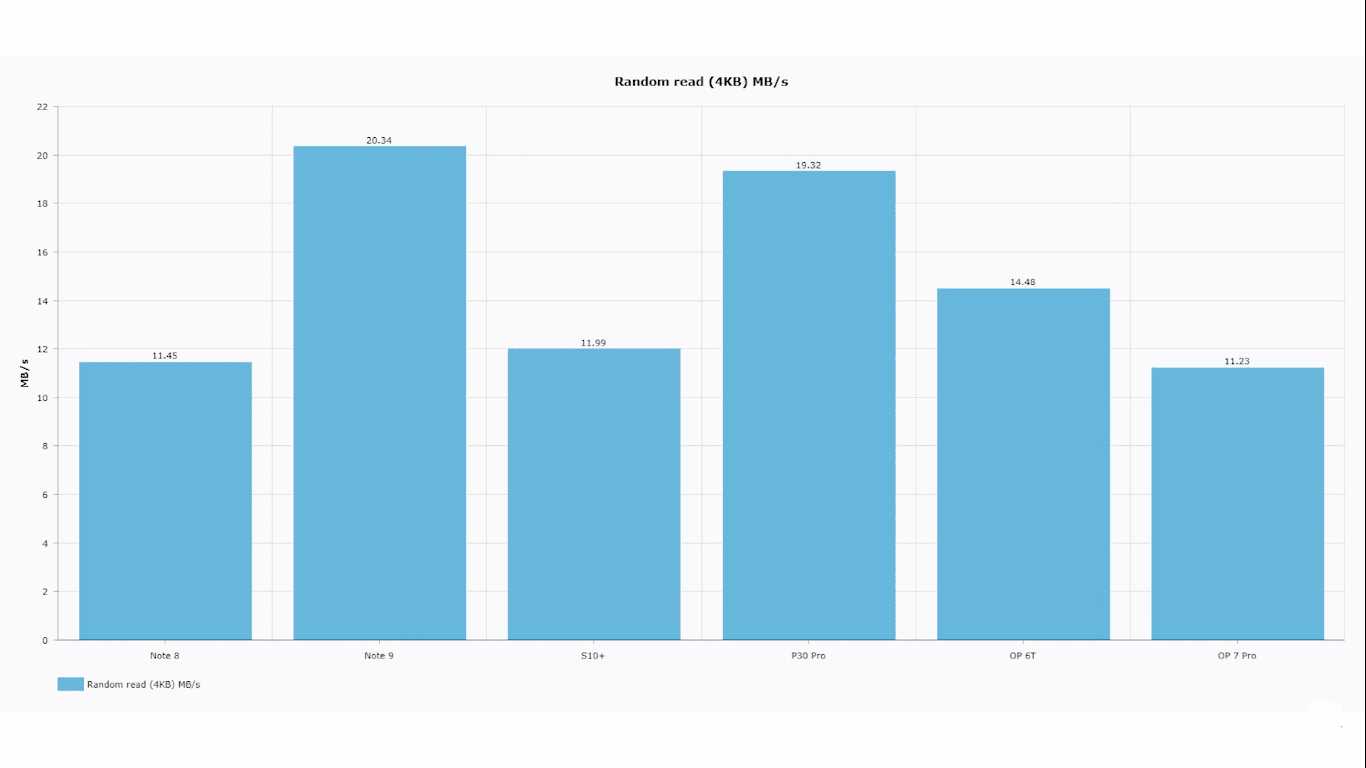 Here’s where OnePlus 7 Pro’s UFS 3.0 gets a little bit a weaker. Compared to the Galaxy Note 9 in the list, it is slower in reading small files on the disk. Although, that doesn’t mean the OnePlus 7 Pro will come last every time. The file system not using the complete bandwidth to read the files. It just takes whatever it requires. Here a lot of factors affects such as speed control of the device, memory management, and file system.

OnePlus 7 Pro’s UFS 3.0 arguably delivers the performance. Although, there are quite factors in technology which considered by no one. Just like here. The results obtained says us a truth about the new UFS 3.0. Now, here’s one thing on which I want to draw your attention is that, smartphone file system (ext4) is designed such way that it can give the best performance even if you are doing multitasking. These factors cannot be ignored. Because in the smartphone you do one task at a time but there is a lot going on in the background.