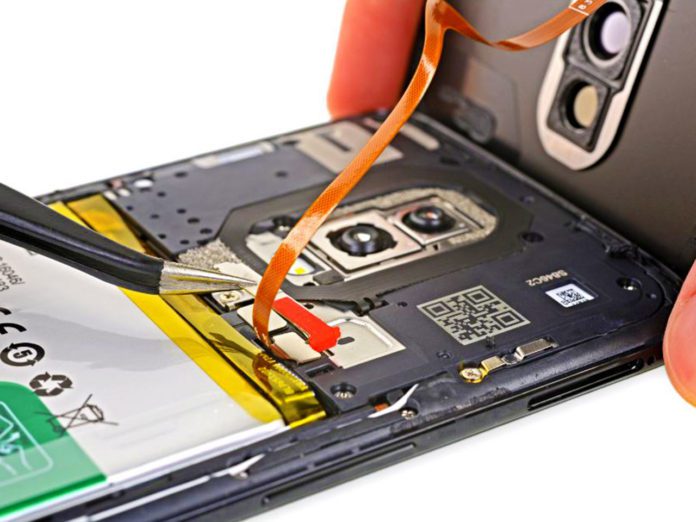 OnePlus 6 was the most anticipated smartphone launched a week before. This time the device is available in three different variants – White, Midnight Black and Mirror Black. The company is known for providing the flagship features under the hood under the affordable price. This time OnePlus family has new variant having the slick black glass on the back and that’s iFixit has decided to teardown this device find out its repairability score.

Doing start by removing the glass back. The glass on the back of the OnePlus 6 provided with the sticky material inside. To soften the things and pull out the whole glass without any crack, it is necessary to blow hot air on the glass. And by using the opening pick, you can remove the glass.

OnePlus 6 comes with the rear faced fingerprint sensor and that’s why the first thing you will see is the fingerprint sensor cable attached to the glass back. However, OnePlus has taken care of the length. They have installed the cable which is long enough to completely remove the glass without worrying about its tearing.

Now, coming on the OnePlus motherboard which is provided on the upper section. The motherboard is the hub which contains small pieces of hardware. Thanks to those pieces to deliver the super-fast performance.

So, from the iFixit teardown, it is clear that the back of the phone can be removed very easily which makes the battery replacement problem actually easy. But, in general, the display problem which is the most common problem consumes so much time. Further, the device comes with the glass on both sides. So, the chances of cracks become twice. Hence, iFixit has given 5 repairability score out of 10.