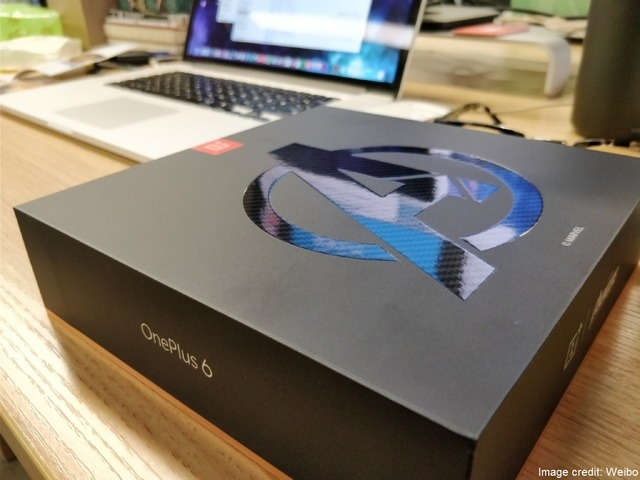 OnePlus 6, most hyped phone of 2018 to is set to launch on May 16, 2018. There are many rumors and leaks came out before the official launch and we have seen all things about OnePlus 6. If you have missed any details (specification, design, display, price) you can check out our posts in our OnePlus archives.

Undoubtedly OnePlus 6 will be the most underrated smartphone just like its previous one OnePlus 5 and OnePlus 5T. The company has plans to launch this smartphone worldwide on May 16 and especially in India on May 17. If you are not living under the rock, maybe you know OnePlus has plans to launch this smartphone based on the Avengers; Infinity War theme. Under this, the company will manufacture some limited fans to feel their fans special with the OnePlus 6 device. Well, the mobile has to still come in the market, it is not so far. But, the box has arrived.

The box is surfaced online ahead of launch. The image of this box was first spotted on the Weibo. This is the official Avenger themes OnePlus 6 box. On the left side you will get the OnePlus 6 branding and on the right side of the box there is OnePlus 6 and Avengers logo. Coming on the top you will get the big shiny huge logo of Avengers.

Interestingly, in the recent, people are talking about on the SlashLeaks website that the image of this box is leaked by the official OnePlus Weibo account or likely it is official OnePlus account. So, it is hint for us that indeed this can be the box of Avenger themed OnePlus 6 design. For more information and interesting articles of OnePlus, head over to our OnePlus archives page.