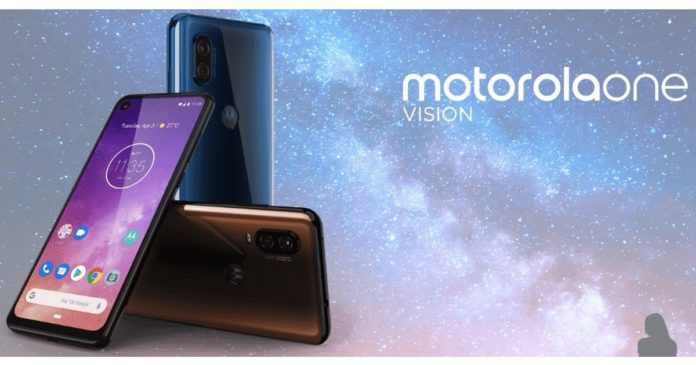 Motorola is expected to launch its successor of Moto One and Moto One Power in Brazil next week on May 15, 2019. The new devices will be called the Motorola One Vision. The device has been leaked in its full glory and it seems like a worthy upgrade after One Powe.

The Android One Program backed Motorola One Vision will be available in two color options: Blue and Brown. The device will flaunt 6.3-inch FullHD+ display with punch hole notch and 21:9 higher aspect ratio. It’s hard to use the 18:9 smartphone one handed and this smartphone will make it impossible to use it one-handed.

The device will have a dual rear camera setup which is expected to house 48MP primary rear camera sensor. The company will use Samsung’s Exynos chipset and rumored to be powered by Exynos 9610 chipset.

Motorola One Vision will be available in 4GB RAM and up to 128GB Internal storage configuration. Talking of Optics, Motorola One Vision will feature dual rear camera array which is expected to house 48-megapixel primary sensor with optical image stabilization and an f/1.7 aperture paired with a depth sensor. For the selfies and video calling it will hose 25-megapixel unit with an f/2.0 aperture.

The Motorola One Vision will pack 3500mAh battery instead of 5000mAh battery from its predecessor with support of Turbocharger. The device will run on Android Pie based on Android One program out the box.