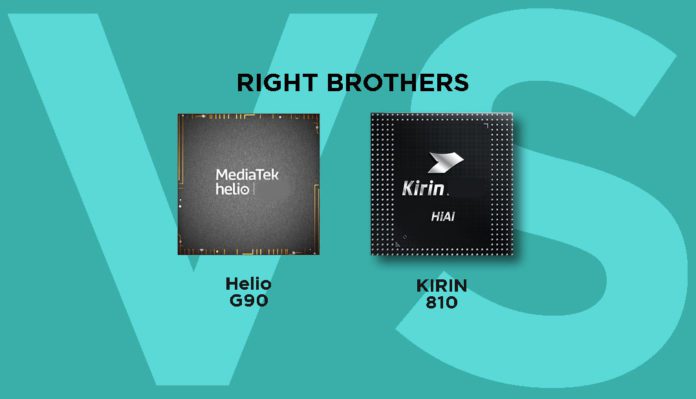 MediaTek has just announced gaming-centric mid-range chipset to compete against its rivals Qualcomm and HiSilicon. MediaTek Helio G90 chipset is aimed to power the mid-range smartphones from various Chinese manufacturers. While Kirin 810 was announced last month. So you might be wondering how it competes with the latest Kirin’s mid-range processor. So here’s an article on MediaTek Helio G90 vs HiSilicon Kirin 810.

HiSilicon Kirin 810 utilizes the same architecture as the Helio G90 but the cores are clocked at a higher frequency which should benefit Kirin 810 to achieve higher performance.

The newly launched MediaTek Helio G90 chipset is utilizing the Cortex A76 cores which are also used in the flagship chipset from the Qualcomm. The company is using Mali G76 GPU to boost the gaming performance of the device. The dedicated MediaTek APU should boost the AI performance even further. It supports up to 64MP camera so we may see the Samsung GW1 sensor with the same chipset.

Kirin 810 brings better performance and also consumes less power as it’s built on the 7nm process. The new Kirin 810 delivers better CPU and GPU performance compared to the competition. It also has a dedicated NPU that should help improve gaming performance and learn your preference over time.

The newly launched MediaTek Helio G90 is indeed very powerful on paper and also outperforms the Snapdragon 730 but it’s not better than Kirin 810 as we can see the benchmark result.

On Antutu, Kirin 810 creates a 13k gap by scoring 237337. While on the Geekbench, Kirin 810 wins in Single-core and Multi-core with contemptible margin.

Well, If you have any feedback please let me know in comments below. Also, make sure to follow our social media platforms for future updates.