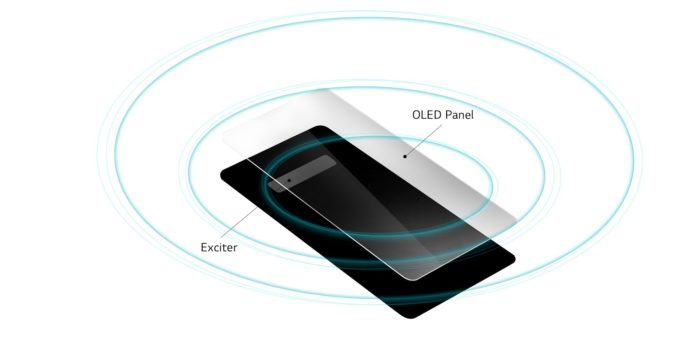 Is it sounds ridiculous or surprising to have a display that will work as an audio amplifier on a smartphone? Well, LG gonna install an OLED display on their upcoming LG G8 ThinQ debuting at MWC 2019. Don’t ask for ‘leak’ source. Because it is officially confirmed by LG on their blog.

The South Korean manufacturer has taken its blog to share this detail with their fans. Explained by LG on Newsroom website, the company has explained how they converted display into an audio amplifier.

In speakerphone mode, audio is delivered with impressive bass through the bottom speaker. Full-bodied stereo performance is possible with a 2-channel audio setup utilizing this bottom speaker and the top part of the display. As well as improving the sound, CSO also gives the LG G8 ThinQ a clean, minimalist look.

LG G8 ThinQ is already been part of the rumors and leaks from the last two months. And you may have seen its high quality renders as well as specifications. Although, this new adds up more juice. LG has already given a name to this OLED display which is being called as Crystal Sound OLED.

This technology will allow the top speaker of the display and bottom-placed speakers to produce a stereo sound effect. Now, it makes sense here for giving the notch on the top. Although, the design is not clear or you can say new 2019 design. With such notes, the company hasn’t included yet any kind of sample video or promotional advertisement. That can give us an idea about the experience (at least we can imagine by actors acting).

So, the production line might be installing this technology in the phones. Because it will be launched at MWC 2019 and go on sale after approximately 10 days. What do you think about this?