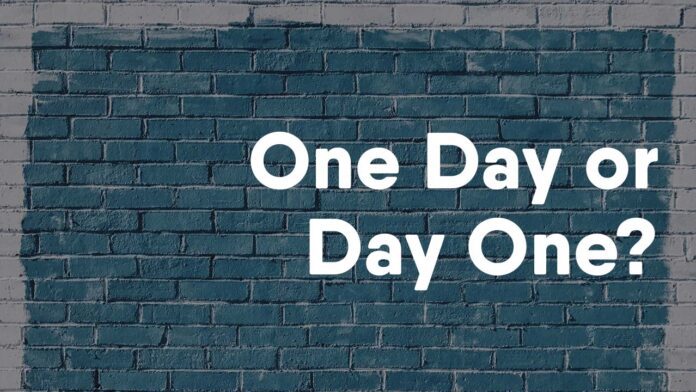 Let’s Make it Day One Rather One Day – Original Article by Jay Thakar, A lazy, unsuccessful guy getting back to the blogging to share what he loves.

As the title says it all, we gotta start doing something that we love one day but what I insist is Day One – Today, Tomorrow, or a week later that’s up to us. We all (at least most of us) are riding in a bus with a bunch of other passengers doing the same thing, following what our parents or closed ones told us to do, doing what we had to. To find your IKIGAI you gotta get out of the bus and take a CAB for a time, maybe ask the driver if you don’t know, how to reach a goal.

The Question is How?

There are like 100 matches in a matchbox and all can be used to find your IKIGAI. The one lights up the brightest is what you seek. In case you don’t know, IKIGAI is a Japanese concept that means “a reason for being” and it is very popular with its life circle.

Once you test all your matches (interests), try to follow it with a different angle every weekend (if you got a job). For instance, if you love cooking then make something that you’ve never tried, if you love playing a musical instrument then explore the diversity in other instruments. In my case, I like writing as a profession so I will be writing things every weekend that I love and have an original idea. Ultimately, “do something” – It doesn’t matter how small the chore is. It’s way better than scrolling through social media or spending half a day sleeping on the weekend.

Of course, unique things or original content won’t literally pop up in your head every weekend so you need to keep hunting on weekdays – maybe read books, articles, take suggestions from someone.

A person can either be creative or productive, no human can be both at a particular time. So you should decide which one are you before going through all the hustles.

Ask yourself two more questions before starting anything – Why this? and why not the one that you’re doing right now? If you can answer both honestly and if those answers make sense to you then you’re good to go and ready for the next big thing.

If you’re just inspired by looking at the outcome of a goal that you chose then my friend, you’re going in the wrong direction. There is a lot of struggle in between, that you are avoiding. We got to think about the middle days instead of Day 100 when the one achieves success. Instead of thinking about what we will do once we achieve that, let’s just think about the next plan and what problem we could face achieving that target. And trust me, this will be more beneficial than looking at an imaginary success of yours.

Let me give you an example to elaborate on this idea, after I finished my graduation, I was afraid of exploring the world, searching for a job, or meeting new people because I was scared of rejection. So, I decided to do what I did in my college times – blogging as a Tech writer. While doing so it didn’t give me enough joy as I used to write the content that’s already there on Google (Although I used to write original content once in a while but that wasn’t enough). That leads me to the addiction of gaming – I used to spend half a day, nearly 8-10 hours a day on playing games which I’m not really proud of. Then I applied for multiple jobs, explored the city, and met new people and that changed me a lot.

Everything that happened till now is for a reason to give us destiny and to find the goal, From now on we choose what we got to do. Now, in my leisure time, I read books, spend little time with family, and while having fun at the same time.

This is just the first day and there might be flaws, maybe my writing is not perfect, maybe the photo that I made for this article sucks, or maybe these all sucks but it’s okay because this is just a day one and there are more to go.

“Let us Together Make it Day One Rather One Day.” Today is my Day One and tomorrow can be yours.