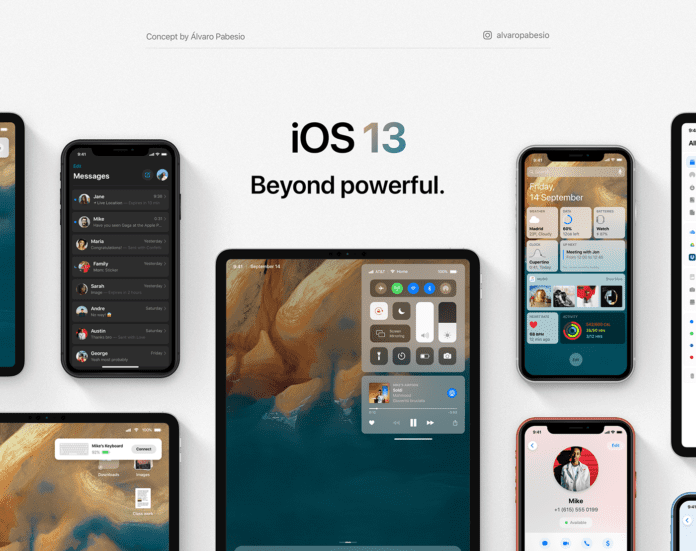 Apple to come up with a new operating system update which obviously will be called iOS 13. Just like every year, Apple has scheduled this year’s Worldwide Developer Conference on June 3. So, it is not so far from us. Apple has already started sending out the invitation to the media companies. Well, we have already shared what to expect along with the new iOS 13.

A guy on Behance has recently shared concept images of iOS 13 and those look way more beautiful then you have imagined ever for any operating system. Apple to announce iOS 13 with a refreshed design and new features at the WWDC event. The company is rumored to bring the new feature called the Dark Mode to all the Apple devices with iOS 13.

Alvaro Pabesio has designed iOS 13 concept for both iPhone as well as iPad including the dark mode. A most annoying thing in Apple’s iOS is the volume adjustment screen. You still get that big volume level indicator on the screen which wastes quite a bit of time. It is replaced with the verticle bar like Android.

For iPhone, the iOS 13 has completely redesigned app includes Messages, Photos, Settings, Control Panel, and Contacts. Also, he has tried to show how all apps should look like when the dark mode is enabled on your phone. Since the dark mode is the most requested feature ever in iOS, there are chances Apple introduce system-wide dark mode in new iOS update.

Unfortunately, this year iPhone SE, iPhone 5S, iPhone 6 and iPhone 6 Plus won’t get this new update. They are officially removed from the list.

If you want to take a look deeply on further images, see them here on his Behance photo album. Show him some love.