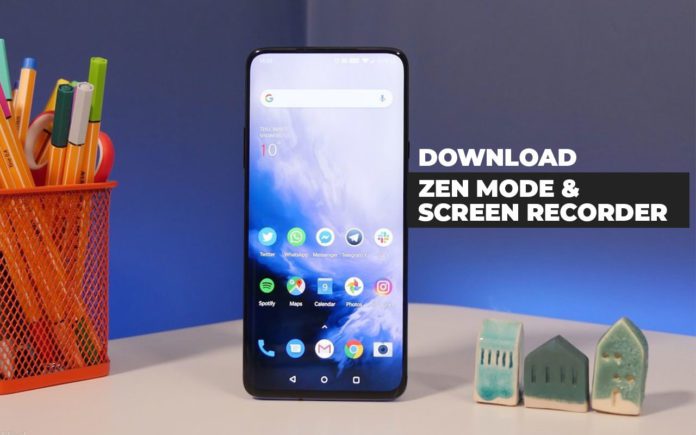 OnePlus launched two new devices on May 14. Compared to the previous generation devices, OnePlus has increased price little bit for their ‘Pro’ variant. Yes, I am talking about OnePlus 7 Pro which comes with the killer specifications. With the better internals and super smooth OxygenOS, the device breaking records in comparison with other flagship smartphones.

Previously we shared OnePlus 7 and OnePlus 7 Pro wallpapers in high resolution. Reminder, if you haven’t downloaded them yet, you can do from here.

As we know, OnePlus 7 Pro comes with the new Zen Mode and in-built screen recorder. However, older OnePlus users haven’t got a chance to test them on their devices. Although, it should become available in future Beta releases of OxygenOS. But, if you cannot wait for them, you can download them and sideload by yourself. Apps are an unofficial version which is ported out by XDA’s senior member acervenky.

You can say Zen Mode is similar to Google’s Digital Wellbeing with a few tweaks made by OnePlus by itself. Zen Mode allows OnePlus 7 Pro user to take a break of 20 minutes when device usage exceeds its threshold set by the user. While the screen recorder app allows the user to record the screen of their device. Although, unlike the other screen recording apps, the feature also allows to include the system audio or mic audio. So, user can record screen with their audio and its helpful when someone tries to make a tutorial video on their device. Further, user can also change the recording resolution which helps to reduce the file size.