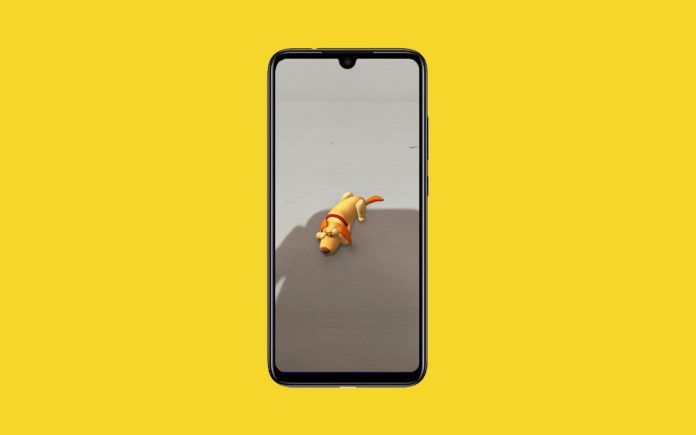 Xiaomi’s spin-off brand Redmi sets the stage for some best budget handsets in India. Since Redmi Note 7 Pro announced, people just went crazy and why not, it offers better internals at a lower price. The company has sold out over 2 million pieces in India starting from its first sale as per the recent report.

Redmi Note 7 Pro offers Camera2API enabled out-of-the-box. That means, without any manual effort, you can install and use the Google camera to click rocking images. But, some of you might already familiar with Google Playground. And it only works on devices which has support for Google AR Core. If not, a brief explanation is below. Let’s go through it first.

‘AR Stickers’ was one of the well-praised features by Google introduced back in 2018. Lately, with the launch of Google Pixel 3 and Pixel 3 XL, the feature has been renamed and re-introduced with some additional changes with name tag – ‘Google Playground’. Google Playground allows users to make characters interact with each other on their smartphone screen. Also, users can take selfies with characters using selfie cam.

With the time, to keep users engaged there are some sweet sticker packs are available. You can download them from the Google Playstore. Since, we know, Redmi Note 7 Pro doesn’t have support for Google AR Core app, you might think it is not possible to get Google Playground support. But, you are wrong.

Requirements to Get Playground Support

You can get Google AR Core support on Redmi Note 7 Pro and later on you can install Google Playground to play with the characters. There are some of the requirements I have mentioned below to get it done.

Before we proceed, I would like to thanks Arnova8G2 for Google Camera.

Kicking things off with the primary file. To add support for Google Playground, you will require to install Magisk module called ‘ARCore/Playground Patcher’. You can either download from Magisk by searching by yourself or download from our drive. 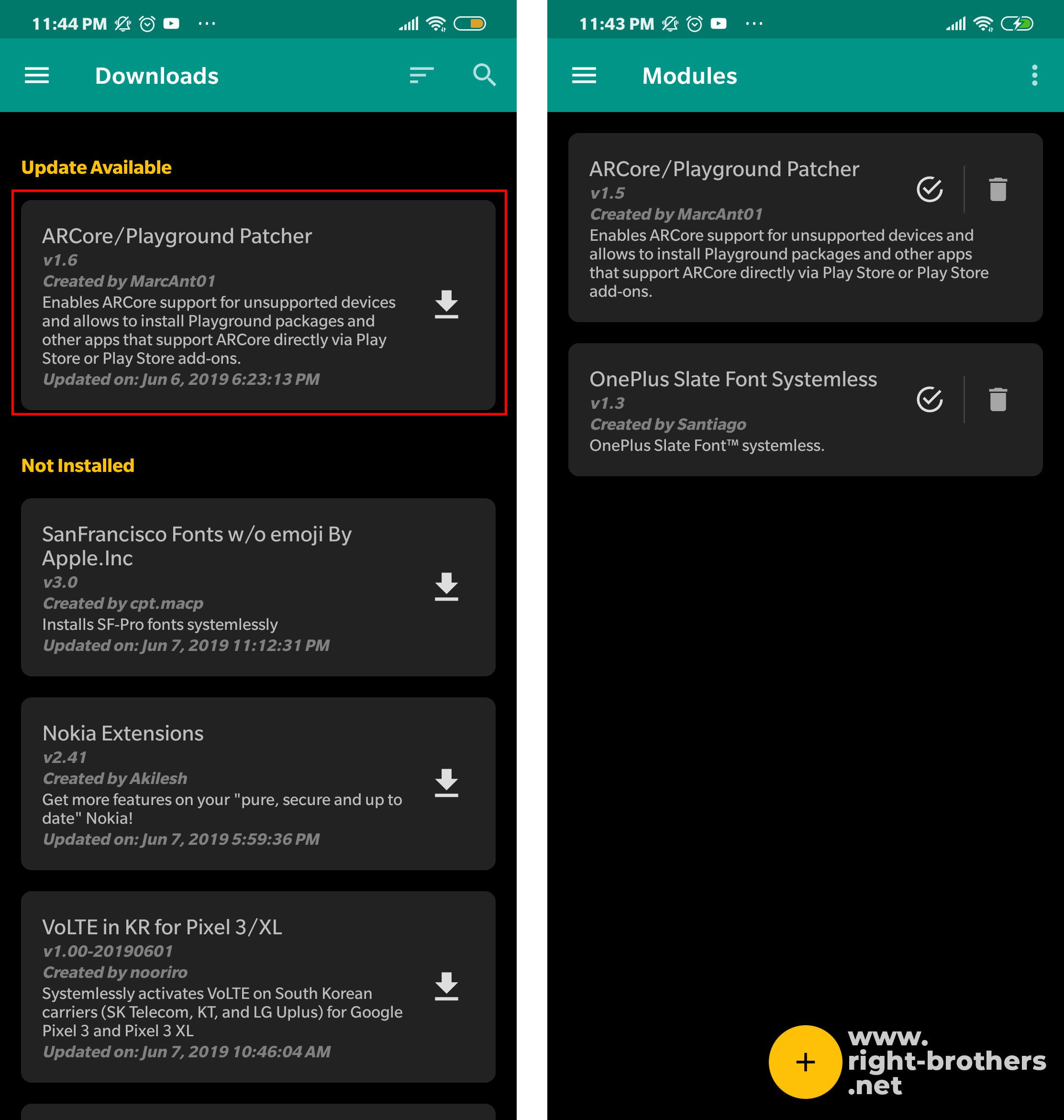 Now, that you have installed patcher, you have opened doors for Google ARCore.

Its time to install Google ARCore app from the Google Playstore. Now, if you will search it by yourself, you won’t get it in search results because since your device doesn’t support it out-of-the-box. So, I have attached the Playstore link below. Go on it and install it.

Since the Playground will work on modded camera tweaked by Arnova8G2, you will have to install Gcam provided by him. You can either find the best working Gcam by yourself from his official site or download the one which I am using through a direct download link.

Download and install the Google camera on your device. And we are good to go on the next step.

Now, it’s time to install Google Playground APK. Now, this app also available on APKPure, which I usually prefer to download from because of course, everyone wants the latest Playground app. But, if you want things to go straight and working, you can download it from our GDrive.

Now, things to note, the APK I have uploaded to Google Drive contains all stickers pre-downloaded. So, it sizes around 468MB.

So, whatever you prefer, in the end, you will require to download this Playground APK on your device manually.

Now, its time to put your characters on your table. For that open Google camera. Go to ‘More’. You will Playground option there. Tap on it. And that’s it. Just place any character you want on your desk or floor and play with it. 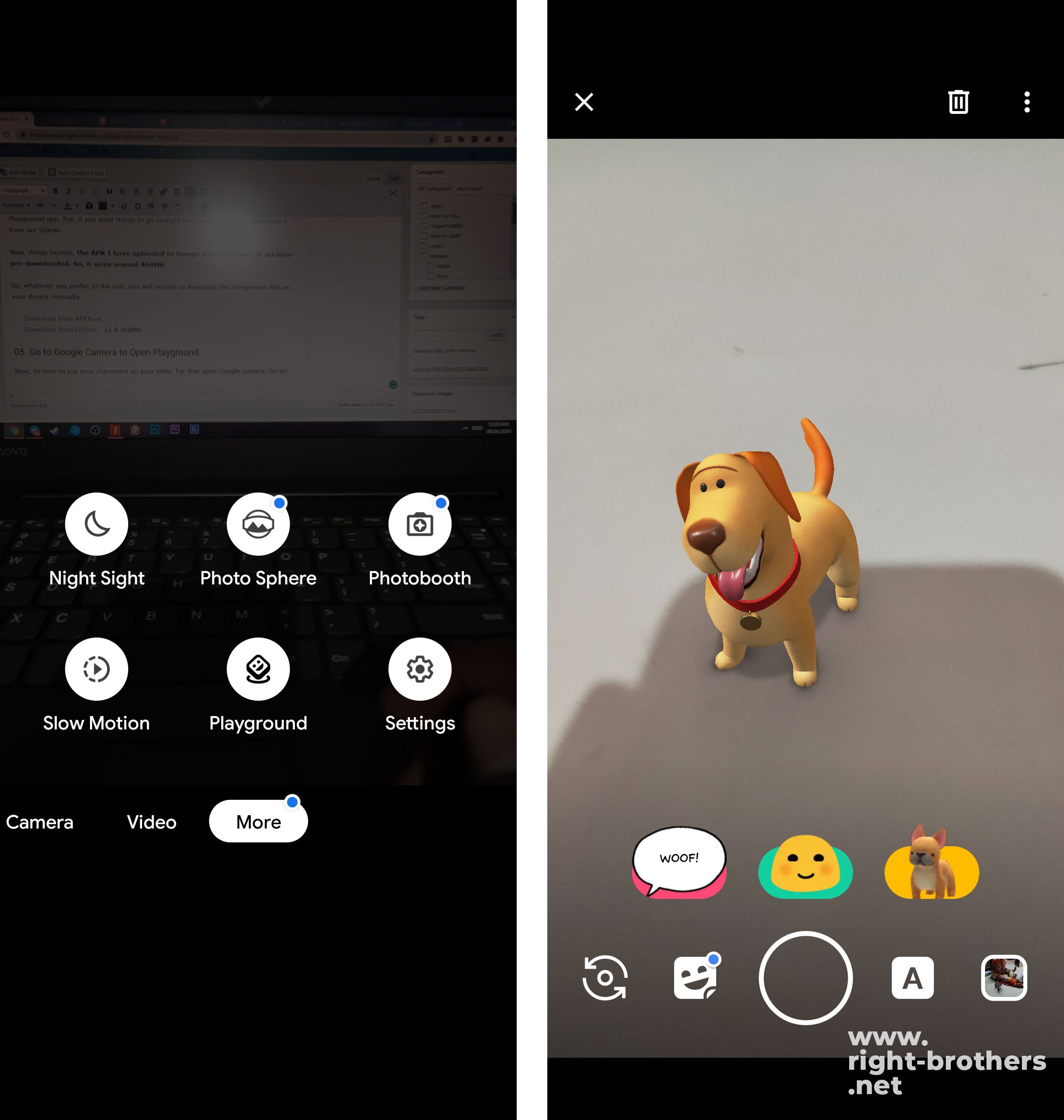 If you are facing any problem, then you can let me know in the comments below. Also, do let me know what do you think about this.