Google has developed in-built video editing features for their latest Google Photos app which allows users to edit basic stuff crop, straighten, color correction, and more. Well if you’re new to this feature just like others then here’s how to edit videos in Google Photos.

Export a still from the video: There is a feature called export a still which lets users download a particular frame from the video. In many cases, there’s a cool shot that the video has captured and you might want to upload it as a photo because it’s not the best to upload a video every time. SO that is where this feature can be useful.

Crop or Rotate: The crop tool can be useful at times to remove the unwanted parts, Not sure how rotating will be useful but you can still do that on google photos.

Color Correction: Color correction is necessity these days and Google knows it very well. That’s why there is a feature to edit and adjust the effect of the video.

Filter: If you don’t want to go deeper in the color correction part then you can directly apply presets from the filter section on your videos.

Draw a highlight on a video: As the name suggests, you can draw something on a video with a markup tool.

Before we head over to the method, make sure you have the latest version of the Google Photos application on your Android or iOS device.

I hope, this article helps you edit the basic stuff of the video. If you have any questions or suggestion then feel free to contact us through our mail. 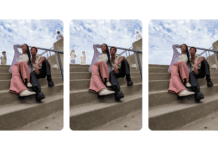