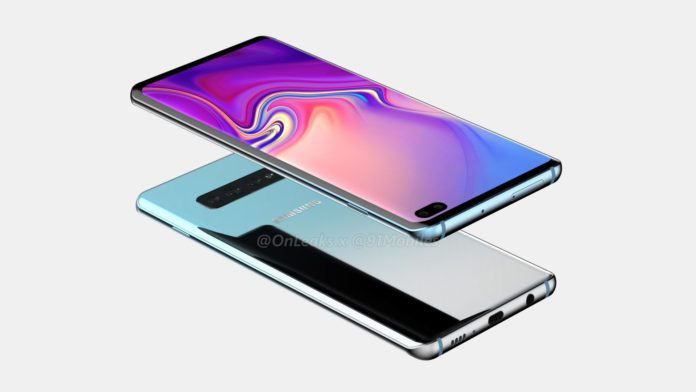 We have got a juicy report on Samsung’s upcoming flagship lineup Galaxy S10. If you keep yourself updated with the latest leaks, you might definitely know almost every detail about it. It seems the South Korean giant is all into its upcoming flagship lineup Galaxy S10. But, at the CES 2019, Samsung revealed some more exciting pieces of tech such as a smart speaker and a display having a rolling display. Unlike the traditional S lineup, this time company has plans to introduce four new devices: Galaxy S10 Lite, Galaxy S10, Galaxy S10 Plus, and 5G Galaxy S10. The new report combines all information together and reveals some very interesting information.

As per reported by the WANGXIANG, Samsung will unveil their upcoming Galaxy S10 lineup with the two different chipsets: Snapdragon 855 and Exynos 9820. But excluding this chipset difference, other features will remain the same. So, the devices are reported to be the IP68 certified and feature 20W charging (earlier it was rumored to have 15W) and Ice Universe mentioned it yesterday in his tweet. Further, all of four devices will be available in three different configurations:

So, now the user will be able to carry freaking 1 terabyte of massive storage in his pocket in a small piece of tech.

Starting with the traditional model, Samsung’s Galaxy S10 device will feature 6.1-inches full curved display sports Infinity-O display that will house single front camera. And as we all know, the phone might carry the ultrasonic fingerprint sensor. As per mentioned by the report, the phone would carry 3500 mAh battery under the hood. At the back, the phone will feature triple camera setup includes wide-angle, telephoto and super wide-angle.

Following are the expected color options that you might see: Black, White, Blue, and Green. And this information is also revealed before and you can catch detailed article here.

‘Plus’ devices from the Galaxy ‘S’ series are popular as they carry slightly more features compared to the base one. The Galaxy S10 Plus already spotted before on AnTuTu benchmark which makes it the fastest device in today’s date having the powerful chipset. While the majority of features will remain the same in this device compared to the Galaxy S10 except, battery, display, and camera.

The Galaxy S10 Plus could carry 4,000 mAh battery under the hood to power the phone and sport 6.4-inches curved screen. On the rear side, Galaxy S10 Plus also reported having three camera modules. However, right now there is no such information about lenses as I mentioned for Galaxy S10. The color variants will remain same as Galaxy S10 device.

Moving on their new this year’s ‘S’ series base model, the Galaxy S10 Lite might be popular this time. So far we already have seen leaks of this device as well. According to the previously leaked information, Samsung Galaxy S10 Lite will have 5.75-inches display and a side mounted fingerprint sensor. While it is a base model, it won’t feature an ultrasonic fingerprint sensor. Further, there is also cut in one camera. It will only feature two camera lenses on the rear side includes wide-angle and telephoto. Following are the color options:

And finally coming onto the Samsung’s new 5G variant, the report suggests, to celebrate its 10th anniversary, Samsung will launch 5G variant of Galaxy S10. It will be a special edition from Samsung. The device will also feature a ToF camera sensor. For all of those who don’t know, ToF is termed as Time of Flight. It is a highly accurate distance mapping and 3D imaging technology.

The device will feature dual camera sensors on the front side as well. Also, you can imagine the 3D face scanning like Apple’s iPhone in Galaxy S10 5G variant because of ToF sensors. On the rear side, the device will carry four cameras includes, wide-angle, super wide-angle, telephoto and ToF sensors. Also, it will feature 6.7-inches screen and ultrasonic fingerprint sensor. Along with the mentioned all four colors of Galaxy S10 and S10 Plus, this device will be available in Black as well as Ceramic variant.