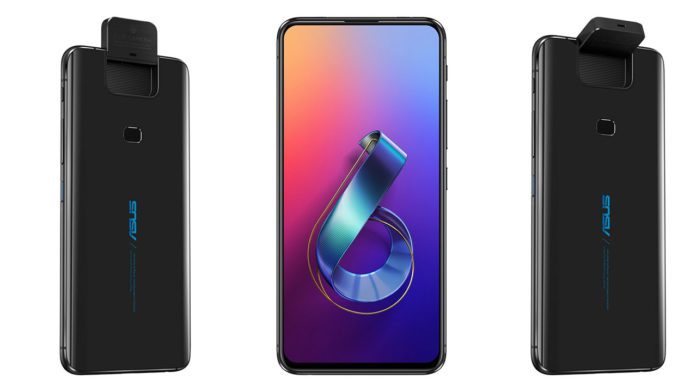 Asus to announce Zenfone 6 Series tomorrow with flagship specifications and rotating selfie camera. Asus is teasing the device on its social media account from a very long time and we have seen some leaks and rumors about the device in the past. So here is everything we know about the Asus Zenfone 6 device.

Asus Zenfone 6 will have an edge to edge display without any waterdrop notch or punch hole notch. The device is expected to have a rotating camera. If you have seen Samsung Galaxy A80 then you must know about the rotating camera. It’s different then Pop-up selfie camera as it users same camera setup as rear to take selfies.

The device is rumored to flaunt 6.3-inch FullHD+ display with 19.5:9 aspect ratio and no notch. Under the Hood, Qualcomm Snapdragon 855 Chipset will power the Asus Zenfone 6 device which will be further paired with 6GB/ 8GB or even 12GB RAM and 128GB/ 256GB internal storage.

In the Optics Side, Asus Zenfone 6 will feature 48MP primary camera sensor paired with 13MP super wide angle camera. The same camera setup will be used to take the selfie or while doing video calls.

The device will pack 5000mAh massive battery as hinted by Asus on its social media platform. It is also rumored to have fast Quick Charge 4.0 support. Asus Zenfone 6 to run on Android Pie out the box. Asus Zenfone 6 won’t have In-Display fingerprint support as we can see the fingerprint sensor on the rear side of leaked render.

Asus may launch Asus Zenfone 6Z alongside Asus Zenfone 6 but that’s not yet confirmed so take it as a pinch of salt. The pricing, Color option and availability is not yet known so make sure to stay tuned with us for future updates.