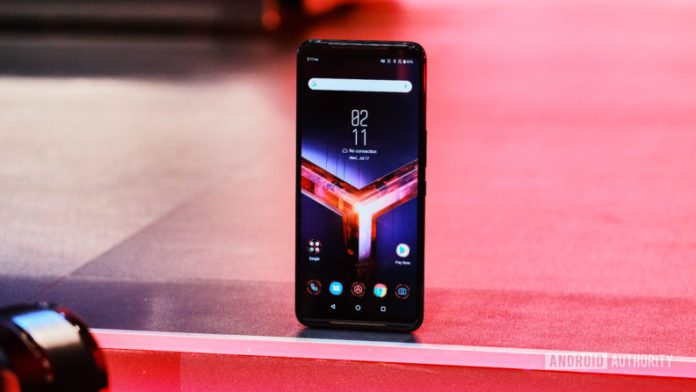 ROG Phone II will also come in Supreme Version. It will be available in Q4.

ROG Phone II will also come in Esports Armor Version. It will be available in Q4.

*The pricing converted in INR are estimated. Please don’t take it as final pricing.

Once again Asus released a new handset under its Republic of Gamers brand. We already have seen this handset in various leaks and just before this launch at the official Asus ROG social media handle. Now the phone is official. Well, looking upon is features, it seems, this phone is ridiculously screaming, “I am a new powerful gaming phone.”

Walking through specifications, the new Asus ROG Phone II gaming handset packs the all-new Snapdragon 855 Plus processor under the hood. This new Qualcomm processor comes with a significant improvement in the graphics unit. I have attached some benchmark results below. Don’t forget to take a look.

The phone comes in the one configuration — 12GB of RAM (LPDDR4X) and 512GB (UFS 3.0) of internal storage. Upfront Asus installed 6.6-inch Full HD+ AMOLED display having a resolution of 2340 x 1080 pixels and 120Hz refresh rate while the 240Hz touch sampling rate. The display has DCI-P3 color gamut with the Corning Gorilla Glass 6 protection.

The all-new ROG Phone II also comes with the 3D vapor chamber which helps to maintain the performance by reducing the throttling when a user plays the intensive game on the phone. However, I am glad Asus moved for the real ait vents on the rear side. If you have seen teardown video of Asus ROG Phone, you might have seen the air vents given on previous-gen handset is just to show-off the design. This time the air-vents are real.

Once again the ROG Phone II packs Snapdragon 855 Plus processor under the hood. That means as a gaming phone, this device should tackle the intensive games available on Google Play Store. While its official launch, Asus shared benchmark results on stage which shows off the impressive performance of this device.

Starting with the 3D mark result, the phone easily beats the OnePlus 7 Pro, Samsung Galaxy S10+ and iPhone XS Max. For the 3D Mark’s Sling Shot Extreme and Sling Shot Extreme Unlimited, ROG Phone II gets 6523 and 6939, respectively. Asus installed Snapdragon 855 Plus processor which can overclock up to 2.96GHz while gaming on ROG Phone II without throttling. Thanks to its vapor chamber.

The last one is for touch latency. Since the battle royale or multiplayer game came on smartphones, the touch latency is considerably playing the role. Every smartphone manufacturers are considering this feature on their phones, specially for them which are made for gaming. Asus ROG Phone II comes with the ultra-low touch latency which is 49ms. Asus claims the ROG Phone II is the world’s first gaming handset with this low latency.

Asus today unveiled their ROG Phone II in China. However, they didn’t reveal the Chinese pricing as well. The company will reveal the price later tomorrow at the Tencent-Asus press event. So, we will give you an update on this article as well as on our Telegram channel. However, looking upon the available accessories, it could be quite interesting.