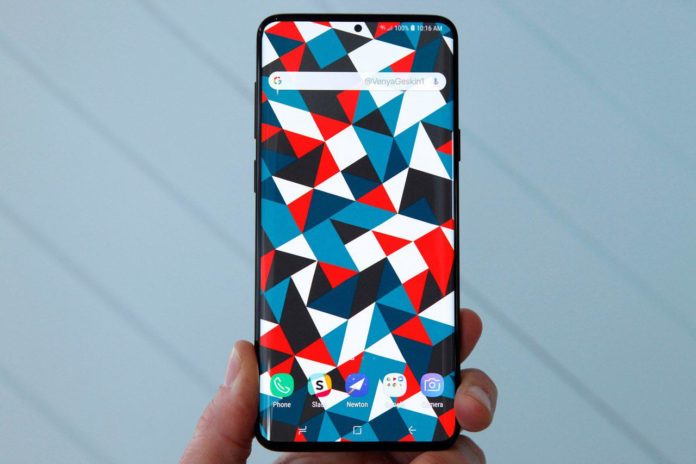 Samsung has rolled out Android Pie update on Samsung Galaxy Note 9, and this new update reveals the new design of upcoming device Samsung Galaxy S10. The new beta update brings the night theme which is to reduce the eye strain in a night, there is a demonstration page which shows how it works and it shows the device with minimal bezels. We are assuming this device could be the Samsung Galaxy S10 considering the previous Samsung records.

Some of the renders also say that Samsung Galaxy S10 will reduce the top and bottom bezels and it will have the highest screen to body ratio among all the smartphones.

Samsung didn’t introduce a new design from last two years because they don’t want to adopt the notch design and the company wants to make the true bezel-less design. Some other companies like Xiaomi, Oppo, Honor, Lenovo introduced a slider phone which is truly bezel-less but it isn’t a great concept at all.

Many other media reported that Samsung is ditching the Iris scanner and making Ultrasonic In-Display fingerprint sensor which is much faster than the Optical fingerprint sensor. This could be the game changer move from Samsung. The next Samsung device could feature the In-Display camera and that technology will be exclusive for at least 6 months said trusted leaker Ice Universe on Twitter.

If you love reading about tech and want instant tech updates on regular basis then subscribe to our Telegram channel and also follow us on our Facebook page.